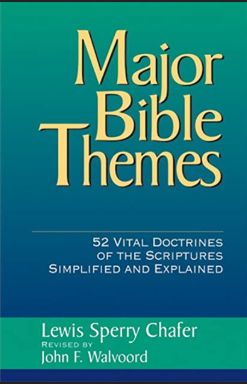 This book is lovingly dedicated to George C. Stebbins whose intimate companionship has for thirty years been to me an abiding inspiration and whose incomparable Gospel music like celestial wings has carried to multitudes of souls in every land the great truths of God’s Word.

Much of the material in this book was published in the Sunday School Times (April to December, 1925) as the author’s notes on the Whole Bible Lessons. Since the original series was incomplete as a representation of the more important doctrines of the Scriptures, several Chapters have been added.

Those Chapters which were originally written as Bible class lessons are outlined and named according to the direction given by the lesson committee and are based on the Scripture selections suggested by them.

This book is in no sense intended to be a treatise on systematic theology. In its preparation, a limited number of the most vital and practical themes have been chosen, and an attempt has been made to adapt these brief discussions to the needs of the untrained Christian.

To each Chapter a list of questions has been added which, it is hoped, may make the studies more useful both to individuals and to groups. The student who would be versed on these subjects should look up every passage cited and continue the study of each theme until all the questions can be answered from memory.

Although the writer presumably has made a careful study of the various subjects treated, it is not his prerogative to dictate what another shall believe; but rather to point out what the Bible teaches. Faith should always rest on a personal understanding of the Scriptures, rather than on the teaching of men.

Bible doctrines are the bones of revelation and the attentive Bible student must be impressed with the New Testament emphasis on “sound doctrine” (Matthew 7:28; John 7:16-17; Acts 2:42; Romans 6:17; Ephesians 4:14; 1 Timothy 1:3; 4:6, 16; 6:1; 2 Timothy 3:10, 16; 4:2-3; 2 John 1:9-10). Not knowing the doctrines of the Bible, the child of God will be, even when sincere, “tossed to and fro, and carried about with every wind of doctrine, by the sleight of men and cunning craftiness, whereby they lie in wait to deceive”; the many well-meaning believers who are drawn into modern cults and heresies being sufficient proof. On the other hand, the divine purpose is that the servant of Christ shall be fully equipped to “preach the word; be instant in season, out of season; reprove, rebuke, exhort with all longsuffering and doctrine.”

These Chapters are released with the prayer that they may honor Him whose glory and grace are supreme, and that some among the children of God may be helped more accurately “to speak the things which become sound doctrine.”

Sample Chapter 1 – The Bible: The Word of God

It is a marvelous thing that we have an infallible Book from the hand of God. Every student and teacher should be fully convinced of this fact. There are two lines of evidence to be traced: (1) That which is internal, or the Bible’s own claim concerning itself, and (2) that which is external, or outward, obvious facts concerning the Scriptures.

I. That Which is Internal

II. That Which is External

Considering the external evidence that the Bible is the Word of God, the Book is a phenomenon and as such presents a challenge to the most skeptical among men. Certain facts should be noted:

The Bible appears in one volume in which there is a perfect continuity of historical sequence from the creation to the new heavens and the new earth; a perfect unfolding of doctrine from the blade to the full corn in the ear; from type to antitype; from prophecy to its fulfillment; and the anticipation, presentation, realization, and exaltation of the most perfect Person on earth or in Heaven. Yet this one volume which exhibits the most perfect continuity of thought that the world has ever seen is, nevertheless, a collection of sixty-six books written by about forty authors—kings, peasants, philosophers, fishermen, physicians, statesmen, scholars, poets, and plowmen—who could have known but little of each other, since their lives were lived in various countries and their writings were distributed over sixty generations of human history, representing a period of about sixteen hundred years.

2. The Extent of its Revelation

In its unfolding of truth, the Bible is inexhaustible. Like a telescope it sweeps the universe from the heights of Heaven to the depths of hell, and traces the works of God from their beginning to their end. Like a microscope it reveals the minutest details of the plan and purpose of God and the perfection of His creation. Like a stereoscope it places all beings and objects whether on earth or in Heaven in right relation the one to the other. Though written in the earlier days of human knowledge when the present world discoveries could not reasonably have been disclosed, it is in harmony with every discovery made by man.

In fullest satisfaction the Bible is claimed by all races as their own, and is, as no other book, translatable into every tongue. It has already been translated into over seven hundred and seventy different languages and dialects. Thirty societies are now specializing in its publication, and over thirty million copies are printed annually. Of this number the British Bible Society publishes every hour more than two thousand copies. The French infidel Voltaire who died in 1778 predicted that the Bible would become obsolete within a hundred years. Contrary to the statement of this skeptic, the Bible abides. For nineteen hundred years it has endured the systematic, destructive attacks from Satan and men; but never has its predicted endurance been more tested than now when those who pose as its friends and exponents are subtly denying its most vital truths and its supernatural character. Its influence is transforming. To the unsaved it is the “sword of the Spirit” (Ephesians 6:17), and to the saved it is a cleansing, sanctifying, and reflecting power (Ephesians 5:25, 26; John 17:17; 2 Corinthians 3:18); it is the basis of all true civilization, law, and morality.

The supernatural character of this Book is seen in the fact that it deals as freely with the unknown and otherwise unknowable as it does with that which is known, and those who follow its teachings are unfailingly led in the paths of God’s eternal Truth. Likewise, as no other book, the Bible accounts for those who do not receive its teachings. Of them it records that they are unregenerate men who receive not the things of the Spirit of God, neither can they know them because only by the Spirit are these things discerned (1 Corinthians 2:13). Its qualities are real, for those who know it best love it most.

Merely as literature, the Bible is supreme. It satisfies the simple-minded and entrances the sage; yet here, again, consideration should be given to the limitations of its human authors. To God alone be the glory!

This Book is not prejudiced in favor of men. It unhesitatingly records the sin, the weakness of the best of men and the doom of all who rely alone on those virtues and merits which are their own. Men do not so speak of themselves. It assumes to be a message from God to man rather than a message from man to man. It speaks with authority of things in Heaven and things on earth; of the seen and of the unseen; of God, of angels, and of men; of time and of eternity; of life and of death; of sin and of salvation; of Heaven and of hell. Apart from its message, there is no knowledge of these eternal issues in all the world: with its message, there is certainty, assurance, and peace.

Above all else in this supernatural Book is its revelation of the Person and glory of God as manifested in His Son. Let no one suppose that this Character is a mere fiction—the invention of a mortal mind; for His perfections have never been comprehended by the wisest and holiest of this earth. If He were a mere fiction, let the mind which conceived Him be extolled and adored!

8. The Bible and Christ Compared

Because of the combination of supernatural qualities which enter into the Bible, a similarity may be observed between the Bible as the Written Word and the Lord Jesus Christ as the Living Word. They are both supernatural as to their origin, presenting an inscrutable and impeccable blending of that which is divine and that which is human. They both exercise a transforming power over those who believe, and are alike allowed of God to be set at naught and rejected by those who do not believe. The untainted, undiminished divine perfections are embodied in each. The revelations which they disclose are at once as simple as the demands of a child, as complex as the infinite treasures of divine wisdom and knowledge, and as enduring as the God whom they reveal.