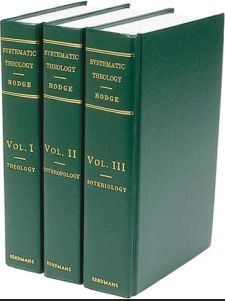 Charles Hodge (December 27, 1797 – June 19, 1878) “was an important Presbyterian theologian and principal of Princeton Theological Seminary between 1851 and 1878. He was a leading exponent of the Princeton theology, an orthodox Calvinist theological tradition in America during the 19th century. He argued strongly for the authority of the Bible as the Word of God. Many of his ideas were adopted in the 20th century by Fundamentalists and Evangelicals.” Wikipedia

1. Theology a Science
2. Theological Method
3. The Speculative Method
4. The Mystical Method
5. The Inductive Method
6. The Scriptures contain all the Facts of Theology

1. Meaning and Usage of the word
2. Deistical Rationalism
3. Second Form of Rationalism.–Its Nature, Refutation, History
4. Dogmatism
5. Proper Office of Reason in Matters of Religion
6. Relation of Philosophy and Revelation
7. Office of the Senses in Matters of Faith

1. Meaning of the Word
2. Mysticism in the Early Church
3. Mysticism during the Middle Ages
4. Mysticism at and after the Reformation
5. Quietism
6. The Quakers or Friends
7. Objections to the Mystical Theory

6. The Protestant Rule of Faith.

1. The Statement of the Doctrine
2. The Scriptures given by Inspiration of God
3. Adverse Theories
4. Completeness of Scripture
5. Perspicuity of Scripture.–Right of Private Judgment
6. Rules of Interpretation

5. The Nature and Attributes of God.

1. Definitions of God
2. Divine Attributes
3. Classification of the Divine Attributes
4. Spirituality of God
5. Infinity
6. Eternity
7. Immutability
8. Knowledge
9. The Will of God
10. The Power of God
11. Holiness of God
12. Justice
13. The Goodness of God
14. The Truth of God
15. Sovereignty of God

Works about the Trinity

7. The Divinity of Christ.

Works about the Deity of Christ

Other works on the Holy Spirit

1. Preservation
2. Government
3. Different Theories of the Divine Government
4. The Principles involved in the Scriptural Doctrine of Providence

1. Usage of the Word
2. Possibility of Miracles
3. Can a Miracle be known as such?
4. The Value of Miracles as a Proof of Divine Revelation

1. Their Nature
2. Their State
3. Their Employments
4. Evil Angels

having considered the doctrines which concern the nature of God and his relation to the world, we come now to those which concern man; his origin, nature, primitive state, probation, and apostasy; which last subject includes the question as to the nature of sin; and the effects of Adam’s first sin upon himself and upon his posterity. These subjects constitute the department of Anthropology.’

1. Scriptural Doctrine
2. Trichotomy
3. Realism
4. Another Form of the Realistic Theory

4. Unity of the Human Race.

1. Idea of Species
2. Evidences of the Identity of Species
3. Application of these Criteria to Man
4. Philological and Moral Argument

1. Scriptural Doctrine
2. Man created in the Image of God
3. Original Righteousness
4. Dominion over the Creatures
5. Doctrine of Romanists
6. Pelagian and Rationalistic Doctrine

1. God made a Covenant with Adam
2. The Promise
3. The Condition
4. The Penalty
5. The Parties
6. The Perpetuity of the Covenant

1. Different Theories of the Will
2. Definition of Terms
3. Certainty consistent with Liberty

Under this head are included God’s purpose and plan in relation to the salvation of men; the person and work of the Redeemer; and the application of that work by the Holy Spirit to the actual salvation of the people of God.

3. The Person of Christ.

4. The Mediatorial Work of Christ.

1. Christ the only Mediator
2. Qualifications for the Work
3. Threefold Office of Christ

1. Its Nature
2. How Christ executes the Office of a Prophet

1. Christ is truly a Priest
2″ Christ is our only Priest
3. Definition of Terms

8. For whom did Christ die?

1. State of the Question
2. Proof of the Augustinian Doctrine

9. Theories of the Atonement.

1. Christ our Intercessor
2. Nature of his Intercession
3. Its Objects
4. The Intercession of Saints

12. The Humiliation of Christ.

1. Includes his Incarnation
2. His Being made under the Law
3. His Sufferings and Death
4. His Enduring the Wrath of God
5. His Death and Burial

1. His Resurrection
2. His Ascension
3. His Session at the Right Hand of God

1. Scriptural Usage of the Word
2. External Call
3. Common Grace
4. Efficacious Grace
5. Proof of the Doctrine
6. Objections
7. History of the Doctrine of Grace

1. State of the Soul after Death.

1. Scriptural Doctrine
2. History of the Doctrine

1. Preliminary Remarks
2. The Church Doctrine
3. Personal Advent of Christ
4. Calling of the Gentiles
5. Conversion of the Jews
6. Antichrist

4. Concomitants of the Second Advent.

1. The General Resurrection
2. The Final Judgment
3. The End of the World
4. The Kingdom of Heaven
5. Theory of the Premillennial Advent
6. Future Punishment