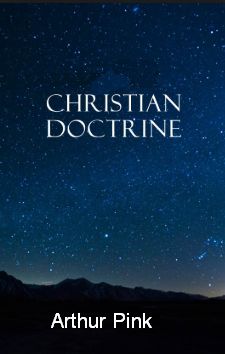 TABLE OF CONTENTS of CHRISTIAN DOCTRINE

Introduction
PART ONE-THE EXISTENCE OF GOD
1. As Manifest in Creation
2. As Revealed in Man
3. As Seen in Human History
4. As Unveiled in the Lord Jesus Christ

PART THREE GOD’S SUBJECTIVE REVELATION
14. In the Soul
15. Is Essential
16. The Holy Spirit Must Quicken

PART FOUR-REVELATION IN GLORY
17. This Life and Life Hereafter
18. The Joy of Death and Heaven
19. The State of Saints in Glory
20. Conclusion

PART-SIX The Doctrine of Man’s Impotency

PART-EIGHT The Doctrine of Reconciliation

PART-NINE The Doctrine of Sanctification.