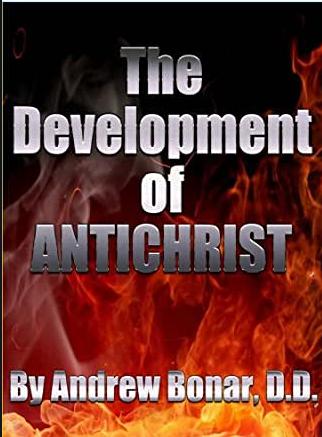 Foreword
Biographical Note
Preface
1. The Personality of Antichrist
2. The Time of His Appearing
3. His Characteristics and Duration
4. His Destruction and Its Consequences
Conclusion

There are strong reasons for concluding that Popery, in its present form, is not, in strict prophetic speech, the last Antichrist. It has many of the features of the Man of Sin, but it has not all.

It is lacking in some, and it is this partial unlikeness that leads us to anticipate something worse, something more terrible, something which will manifest more vividly what the combined energy of human and Satanic wickedness can effect when fully expanded and matured.

Still, there is a distinct and observable oneness of features between these two forms of evil. There are some clear points of difference, but there are more of resemblance, a striking family likeness, distinct traces of common paternity, and an undoubted brotherhood, and more than enough to identify them as belonging to one genus, one plant, one stem.

That the fruit and the blossom are very unlike each other in many things, in color and in shape, for instance, is no proof that the one is not the product of the other, and that both are not the product of the same tree. Pagan Rome might be but the branch, Papal Rome the blossom, and the last Antichrist the fruit; but does this disprove their true personal identity? Does it not much rather confirm and display it?  Development of the Antichrist

The last apostasy will, in all likelihood, manifest more of the Infidel or the Atheist than Popery has done; but still, it is an “apostasy,” a “falling away.” It originates in, springs out of, and is in some way connected with the professing Church of Christ, just as the fruit is connected with the branch, though but by a slender stalk.

Its name, ANTICHRIST, shows that it professes to be Christ, which it could not do were it openly and utterly Infidel.

It is an apostasy which has taken ages to ripen, and which, though perhaps shooting up suddenly into unexpected strength, does not rise from some separate root of its own but is the matured offspring of previous apostasies, their consummation and unfolding, towards which every one of them has been pointing, and which every one of them contained in the bud from the beginning. Development of the Antichrist

Works on the Antichrist

Also see tags in Eschatology (below)

But though I believe all this, I do not the less surely believe that Popery is the present Antichrist, out of which, how suddenly I know not, the coming Antichrist is to spring. Popery is the apostasy of the day, and as such ought to be dealt with by the Church of Christ.

There are many symptoms about it of a change of form and aspect; but whatever aspect it assumes, it is still the representative of the serpent’s seed, the personification of the wicked one in our day, the enemy of the saints.

It is right, indeed, that we should fully understand what God has revealed concerning the darker and more hateful form which it is to assume. But it is wrong to overlook its present aspect as if that which was to come concerned us more immediately than that which is in the midst of us.

This would truly be as absurd and perilous as for an army to stand idly on the field and allow itself to be cut to pieces by a near enemy because it sees in the rear a more terrible assailant pressing on.

I do not mean that the present ought to shut out or supplant the future. But certainly, the future ought not to supersede the present, nor blind us to our immediate danger and pressing duty. Development of the Antichrist

I regret most deeply the conduct of some writers on prophecy, who seem so engrossed with a future Antichrist as to forget, nay, to deny, the present. They have let loose the whole gloom of their dark imaginations upon the future and make light of all that is passing around them.

They so occupied with the picture which they have drawn of the Man of Sin, as yet to be revealed, that they refuse to see any resemblance at all to him in the Church of Rome.

Struggling not to palliate the atrocities and to apologize for the doctrines of Popery, in order to be able to deny the likeness. They labor exceedingly to conceal or blot out those features expressive of common paternity which have been so often pointed out. Not sparing any effort to persuade men not only that

Popery is not the Man of Sin, but that it has nothing in common with him. They exaggerate the future, they soften and palliate the present, they try to obliterate some of the worst features of Popery in order to remove everything by means of which it might be identified with the Man of Sin.

Nothing can be more perilous for the Church. It throws her entirely off her guard, and persuades her, that though Popery may be an enemy, yet it is not the bitter and deadly enemy which Scripture represents it to be, Nay, that there is nothing so decidedly Antichristian about it as to prevent its being, in some measure, recognized as a Church of Christ.

Making her believe that to arm herself against Popery as against Antichrist is entire to mistake her enemy. Thus she is soothed into false and most fatal security.  She unfastens her armor. She lays aside her weapons under the persuasion that her great adversary has not yet arisen.

Thus she is represented as without an enemy; at least, without that an organized system of the hostility of which the Holy Spirit has forewarned her. Is this consistent with Scripture? Does the sure word of prophecy ever teach us this? Are we not continually reminded of the working of Antichrist around us, and in our own day?

Is it not God’s special object to keep us on the watch against the Antichrist of the day? In the present apostasy, even more than the future, that the Church needs to know and watch against.

It matters not how immature that apostasy may be. It may be only in infancy, or it may be in youth. Still, it is against that particular development or stage of it that is in operation in our own times that we are to watch. Our eye should be fixed. It is the movements of that power that we are special to observe.

It is on the side on which that foe assails that we are to throw up our strongest entrenchments. The belief that there is a stronger and more numerous host in the rear, marshaling his troops for the onset, is no reason why we should not repel a present and most formidable enemy whose fire is thinning our ranks. He whose persevering skill has already carried some of our strongest defenses.

Andrew Alexander Bonar (29 May 1810 in Edinburgh – 30 December 1892 in Glasgow) was a minister of the Free Church of Scotland, a contemporary and acquaintance of Robert Murray M'cheyne and youngest brother of Horatius Bonar.

Bonar was identified with evangelical and revival movements and adhered to the doctrine of premillennialism. During the visit of Dwight L. Moody to Britain in 1874 and 1875, Moody was warmly welcomed by Bonar, despite the latter receiving considerable criticism from other Calvinist ministers in the Free Church.

His Glasgow house was demolished in the 1960s and is now the site of modern offices.

Works on the Antichrist

Also see tags in Eschatology (below)

Bonar, A. Development Of The Antichrist
Bonar-Andrew-Development-of-the-Antichrist-wlue777.gbk__2.twm
Version: 1

This is a short work by Bonar on the Antichrist. His chapters are the Personality of the Antichrist, the time of his appearing, his characteristics and durtion,his destruction and its consequence, conclusion.