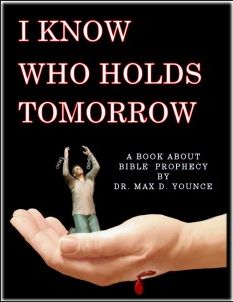 Dr. Younce assembles all the pieces of the supernatural puzzle to present the clearest, dispensational view of Eschatology available for theWord.

Dr. Younce assembles all the pieces of the supernatural puzzle to present the clearest, dispensational view of Eschatology available for theWord.

What makes this book rare and exceptional is:

Calling this resource a “book” is an understatement—it “feels” and reads like a textbook, not because it’s complex but because it’s so comprehensive. The book includes nearly 350 pages and dozens of diagrams and images.

If you read older, public domain scholarship on Eschatology, it becomes clear–even comical–that the writers then had no idea what to do with the Old Testament prophecies concerning Israel. They had no idea how to interpret Revelation. And why should they? Israel did not exist then as country. The technology that will enable much of Revelation to literally happen has just arrived in the past few decades and in some cases, the past few years. What seemed like “spiritual symbolism” 100 years ago, or even 50 years ago, could now literally happen.

Dr. Younce ties Old Testament prophecy to Revelation in a powerful, understandable ways. My personal thank you to Dr. Younce who wrote this book, not for personal financial profit, but for the education of Christians. One can strive for an earthly reward or a heavenly reward, and clearly, Dr. Younce has chosen the latter.

From the Back Cover of the book:

SECTION ONE is an overview of the dispensations and shows that, since past prophecies given in Scripture have been fulfilled; we can believe that future prophecy will be fulfilled in the same way.

SECTION TWO includes major prophecies fulfilled by Christ when he was here.

SECTION THREE of this book explains, in order, fifteen of the major points of Bible Prophecy; from the Rapture of the Church to the New Heavens and the New Earth.

A. THE CHURCH AGE, that period of time in which we now live.

B. THE RAPTURE OF THE CHURCH when the church is “delivered from the wrath to come.” (1 Thessalonians 1:1)

C. THE JUDGMENT SEAT OF CHRIST takes place in Heaven, after the Church is “caught-up” (Gr. harpazo, to snatch).

D. THE RAPTURE is followed immediately by the 7-Year Tribulation Period. Scripture says, “And except those days should be shortened, there should no flesh be saved: but for the elect’s (the saved) sake those days shall be shortened.” (Matthew 24:22) The Book of Daniel gives the figures, and they are explained by a Diagram. (Pg.180)

E. THE MARRIAGE SUPPER OF THE LAMB. The Lord Jesus Christ is the Bridegroom; but, who is the Bride? (Pg. 181)

F. THE FIRST BATTLE OF GOG AND MAGOG. Immediately after the Rapture of the Church, Russia and five allies come against the Nation of Israel. For more on this exciting subject, see Page 193.

I. THE SECOND COMING OF JESUS CHRIST. He returns to Earth, not as the meek and mild “Lamb of God”; but, roaring out of Heaven as the “Lion out of the Tribe of Judah.” (Rev. 5:5) to defeat the Anti-Christ and his forces at the Battle of Armageddon (J).

K. THE JUDGMENT OF THE NATIONS is at the end of the Tribulation; where the Lost are cast alive into the Lake of Fire. “Depart from me, ye cursed, into everlasting fire, prepared for the devil and his angels:” (Matthew 25:41)

L. THE KINGDOM REIGN OF CHRIST ON EARTH. God will keep all his promises to Abraham, Isaac, and Jacob. Israel will get her land back. The Kingdom will truly be a time of peace; in contrast to the false peace promised by the Anti-Christ.

M. THE SECOND BATTLE OF GOG AND MAGOG. The Anti-Christ and the False Prophet have been cast into the Lake of Fire (Rev. 19:20); Satan is chained in the Bottomless Pit for the 1,000 Year Kingdom (Rev. 20:1,2); but, is loosed for “a little season.” The Kingdom begins with all saved ; but, some children will reject Christ. With long life being restored , Satan is still able to gather an army as large as “the sand of the sea.” He “bites the dust” again as promised in Genesis 3:14.

N. The Great White Throne Judgment. ALL the lost that have ever lived on Earth are now in “Hades”; or, the Lake of Fire. The Dead, “small and great” will be brought up to stand before God and the “books will be opened.” Their sentence will be, “…I never knew you: depart from me, ye that work iniquity.” (Matthew 7:23)

O. THE NEW HEAVENS AND THE NEW EARTH. God will remodel this Old Earth into a new Earth, to be inhabited only by the saved in their resurrected bodies. There is no sin there, as “wherein dwelleth righteousness.” (2 Peter 3:13)

SECTION FOUR: The City of Babylon and the One-World Religious System.

Remember, Jerusalem and Babylon must be existing at the time of the Rapture. Babylon will be rebuilt into the great city that suffers destruction at the end of the Tribulation Period. (Revelation, Chapters 16, 17,18) Nowhere is the United States mentioned in Bible Prophecy.

Dr. Younce assembles all the pieces of the supernatural puzzle to present the clearest, dispensational view of Eschatology available for theWord. What makes this book rare and exceptional is: Comprehensive but clear presentation of prophecy | One of the best books on Bible prophecy I've found anywhere, at any price. | The textbook is ready for use in Bible studies and even classrooms. | Calling this resource a "book" is an understatement