Please donate something if you use this website and find it useful $5 even helps.

Friends of our ministry!
I am working on making a USB of all the modules I have available to send out. Until I am ready to release that USB (probably next year), I am offering you the opportunity to get it piece-meal as the modules are finished. How do you get this free offer?
Simply Subsribe to email alerts for posts from this website.

If it says to manage your options you are already subscribed.

Target date for next batch distribution: June 7, 2021 about 500 tw modules 341 MBs
(I will only send these files via wetransfer.com one time to those who are subscribed to my email alert list.) The files will be available for a few days and then the service will delete them automatically. I have over 6 GBs of files to eventually format and send out. Some will be uploaded here. I get very, very few donations, so I am limited on how much I can place on this twmodules.com because it does cost. (Click here to see the list of files.) 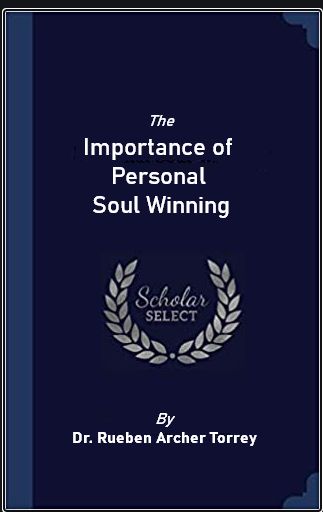 The Importance of Personal Soul Winning

Topics in The Importance of Personal Soul Winning

Sample Excerpt from The Importance of Personal Soul Winning

I want to talk about the advantages of personal work.

The first advantage: Anybody Can Do It You cannot all preach. I am glad you can’t. What an institution this world would be if we were all preachers! You cannot all sing like Charles Alexander. I am glad you can’t, for if you could, he would be no curiosity; and you would not come to hear him sing and give me a chance to preach to you! You cannot all teach Sunday school classes. Some have an idea that any converted person can teach a Sunday school class. I don’t believe it. I think we are making a great mistake in setting the unqualified to teaching.

But there is not a child of God who cannot do personal work. A mother with a large family knows she is not called to be a preacher (at least I hope she does); but she can do personal work better than anybody else in her home.

A lady came to me–she had five children–and said (I think she had been reading the life of Frances Willard), “I wish I could do some work like that for Christ.” I said, “You can work for Christ among all the people you are surrounded by.” I watched that woman. Every one of her children was brought to Christ–every one! Every maid who came to work in that home was dealt with about her soul. Every grocer’s boy who came around to the door was dealt with about his soul. Every time she went out shopping, she made it a point to talk with the one behind the counter. And when, one dark day, death came into the home and took away a sweet little child, she did not forget to speak to the undertaker who came to do the last offices for the dead, about his soul. He told me that nothing had ever impressed him as that woman, in the midst of her sorrow, being interested in his soul.

An invalid can do personal work. I have a friend in New York City who has left a life of wealth and fashion to go out to work among the outcast.

One day she got hold of a poor outcast girl. The girl didn’t live much over a year after that lady had led her to Christ. My friend took her to her home to die. As Delia was dying, she wrote to her friends, some in Sing Sing Prison, some in the Tombs of New York City–all her friends were among the criminal class–about Christ. Those who were not behind prison bars she invited to come and see her. My friend told me, “There was a constant procession up the stairway to the outcast–women and men who came to see Delia. Before Delia died, one hundred of the most hopeless men and women in New York City she had led to Christ.” That puts us to shame! Suppose God kindled a fire right here in your hearts and you received the anointing of the Spirit of Christ, and every one of you should start out to do personal work; you would not need any evangelist to come from abroad.

We have come to stir you up to do it.

Reuben Archer Torrey (28 January 1856 – 26 October 1928) was an American evangelist, pastor, educator, and writer. He graduated from Yale University in 1875 and Yale Divinity School in 1878. Following graduation, Torrey became  Congregational minister in Garrettsville, Ohio, in 1878. After further studies in theology at Leipzig University and Erlangen University in 1882–1883, Torrey joined Dwight L. Moody in his evangelistic work in Chicago in 1889, and became superintendent of the Bible Institute of the Chicago Evangelization Society (now Moody Bible Institute).

Five years later, he became pastor of the Chicago Avenue Church (now the Moody Church) in 1894.  In 1902–1903, he preached in nearly every part of the English-speaking world and with song leader Charles McCallon Alexander conducted revival services in Great Britain from 1903 to 1905. During this period, he also visited China, Japan, Australia, and India. Torrey conducted a similar campaign in American and Canadian cities in 1906–1907. Throughout these campaigns, Torrey used a meeting style that he borrowed from Moody's campaigns of the 1870s. In 1907, he accepted an honorary doctorate from Wheaton College.Read more

How to Bring Men to Christ, (1893)
Baptism with the Holy Spirit, (1895)
How to Study the Bible with Greatest Profit, (1896)
How to Obtain Fullness of Power in Christian Life and Service (1897)
How to Pray,
What the Bible Teaches, (1898)
Divine Origin of the Bible,  (1899)
How to Promote and Conduct a Successful Revival, (1901)
How to Work for Christ, (1901)
Revival Addresses, (1903)
Talks to Men About the Bible and the Christ of the Bible, (1904)
The Bible and Its Christ: Being Noonday Talks with Business Men on Faith and Unbelief (1906)
Difficulties in the Bible, (1907)
Studies in the Life and Teachings of our Lord, (1909)
The Higher Criticism and the New Theology (1911)
The Fundamentals: a Testimony to the Truth Editor, (four volumes) ISBN 0-8010-8809-7
The Person and Work of the Holy Spirit
The Baptism with the Holy Spirit
The Holy Spirit: Who He Is and What He Does and How to Know Him in All the Fulness of His Gracious and Glorious Ministry
The Importance and Value of Proper Bible Study
Why God Used D. L. Moody, (1923) (modern reprint by CrossReach Publications, 2016)
The Voice of God in the Present Hour (1917)
Is the Bible the Inerrant Word of God?: And was the Body of Jesus Raised from the Dead? (1922)
The Power of Prayer and the Prayer of Power, (1924)
The Bible, the Peerless Book: Gods Own Book and Gods Only Book (1925)
How to Succeed in the Christian Life,
The Gospel for Today
Real Salvation and Whole-Hearted Service
The Fundamental Doctrines of the Christian Faith,
Torrey's Topical Textbook
Treasury of Scripture Knowledge
Anecdotes and Illustrations
The Deity of Jesus Christ (posts/available on 7/6/2020)
Short article: Keep Praying Until God Answers When He Seems Not to Hear, Trust Him Still (included in Cox Articles on soulwinning)
By R. A. Torrey (1856–1928)
more on wikipedia.org