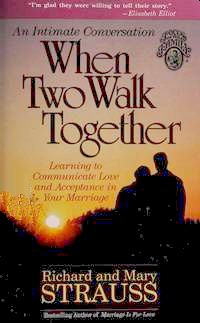 Strauss – When two walk together Pastor Strauss explains some aspects of living with your spouse, and why it is important that two people are both saved before they get married. he relates his reflections and his wife’s reflections on marriage.

Strauss When two walk together

When Two Walk Together
By: Richard L. Strauss Learning to Communicate Love and Acceptance in Your Marriage
Mary Strauss contributed to this series.

During his 60 years, Dr. Richard L. Strauss–former pastor of Emmanuel Faith Community Church–loved God, and he loved to study His Word. He spent hours each week pouring over the Bible, allowing the Holy Spirit to teach him so that he could teach others.

During his 35-year Christian ministry, Dr. Strauss shared approximately 1500 sermon messages. Some walk through books of the Bible in an exegetical manner. Others are topical. All are Bible-based and thus profitable for our use and edification.

Learn what it means to be a Christian and how to grow in your relationship with God by listening to a message today.

Attributes of God
Names of God
Pleasing God
Will of God

Contents of when two walk together

Strauss When two walk together

Our marriage wasn’t supposed to be like this. How could it have turned out this bad?

Richard, look at this. There’s a two-for-one ad from El Chico Restaurant in the newspaper tonight. I think maybe we can afford that. And Steve had a pretty good nap today. He should be good in the restaurant. Do you think we should go?”

My reply was instantaneous: “Let’s do it!” Mexican food was getting to be my favorite.

Our stomachs were filled, and we were all quite contented as we started out of the restaurant. I stopped at the cash register to pay the bill, while Mary took Steve on to the car. It had been a pleasant evening out for all of us, a rarity with our busy schedule. And I was feeling proud that we were able to pull it off on such a limited budget.

I slid behind the steering wheel of the car and handed the change to Mary. She was good with figures, and I appreciated her willingness to handle the family finances. It wasn’t easy for me to carry a full academic load at Dallas Seminary, work twenty-five hours a week to support my family, and still try to spend some quality time with them. She took some of the pressure off of me by keeping the books and paying the bills, and she did it well.

As I started the car, I saw out of the corner of my eye that she was counting the change I had given her. “Didn’t you count this in the restaurant?” she asked. “You’re a dime short.” She sounded angry and upset. “No,” I replied. “I assumed the cashier gave me the right amount.” “Well, she didn’t. She gypped you a dime. And I think you ought to go back in there and get it.”

“Mary, I’m not going back in there and ask for a dime. We fed three people for the price of one. How can you say that they cheated us?” The very thought of going back into the restaurant and asking for that dime struck terror into me. I didn’t have the confidence nor the assertiveness to handle a situation like that. But I wasn’t going to admit that. I would simply keep pointing out to her how ridiculous it would be to go back and ask for the dime when the restaurant had already given us such a good deal. It wasn’t worth the effort.

Before I realized what was happening, our 1951 Plymouth had turned into a battleground. Mary was literally shouting at me. “Maybe a dime is not important to you, but you’re not the one who has to stretch the money. Every penny counts. And that’s ten pennies! You don’t understand how difficult it is to make ends meet with your paycheck. And if you don’t care any more about it than that, then you can just handle the money yourself. I’m sick and tired of the hassle.”

I could feel myself getting more and more angry as I defended my refusal to go back for the dime, and my voice was getting louder and louder as I tried to make her see how unreasonable she was acting. The angrier I got, the more hostile she became, and the argument was getting hotter by the second. Our young son was standing on the front seat of the car between us (before the days of seat belts) taking it all in. His head was swinging back and forth from one of us to the other, and his eyes were as wide as saucers.
Arguments like this had become the normal pattern of our marriage.

They would leave us feeling bitter and alienated from each other, and the coolness would last for days at a time. Neither of us liked it that way, but we didn’t know how to change it. It wasn’t supposed to be like this. We were the ideal couple–I was the preacher’s kid–a good kid. My father used to say that I never gave him a day of trouble in my whole life. Mary was considered to be one of the more spiritually minded young people in our church. We had come from almost identical backgrounds, and we were supposed to have the perfect marriage. How could it have turned out to be this bad? Maybe our two worlds were not as much alike as we thought they were . . .

Pastor Strauss explains some aspects of living with your spouse, and why it is important that two people are both saved before they get married. he relates his reflections and his wife's reflections on marriage.