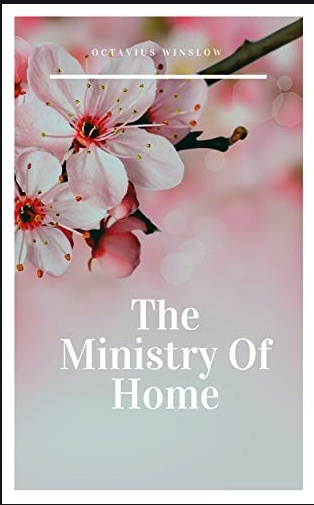 The Ministry of Home

By Octavius Winslow
About 7 pages long.
Winslow The Ministry of Home

Table of Contents of Winslow The Ministry of the Home

The Ministry of Suffering

Excerpts from the work

Suffering is equally the gift of God’s wisdom. His wisdom, too divine to err, ordained it. In nothing of our history is God’s wisdom more conspicuous than in devising and arranging its each act. This fact often rises before us with startling effect; we are compelled to stand still and acknowledge the shaping of God. There has been exhibited such foresight and design, such forethought and harmony as forces from us the acknowledgment, “This is the finger of God!” In this light, beloved, would we teach you to view your present suffering.

Nevertheless, it is the gift of a Father who loves us too well to be unkind. “As many as I love I rebuke and chasten.” Afflicted saint of God! in this soothing light I bid you view your present suffering. If God did not love you He would not deal with you thus. Sound the depth and estimate the tenderness of His love by the nature and intensity of your suffering. Because He loves you He thus smites.

Suffering is involved in all we do for Jesus. There never was service for God without sacrifice, or a path of duty without a cross, good done for others apart from self-denial in ourselves. The precious seed we here sow- the token of a golden harvest- must be saturated with tears. We must work, with conscious infirmity and unworthiness in ourselves, against much resistance and opposition from others, and in view of great difficulty and discouragement springing from our work. In all we do and endure for Christ, we must keep in memory the cross upon which He died, and endured for us.

We may spread our couch with roses,
And sleep through the summer day;
But the soul that in sloth reposes,
Is not in the narrow way.

If we follow the chart that is given,
We never need be at a loss,
For the only way to heaven
Is the “royal way of the cross.”

To one who is reared in splendor
The cross is a heavy load,
And the feet that are soft and tender
Will shrink from the thorny road.

But the chains of the soul must be riven,
And wealth must be held as dross,
For the only way to heaven
Is the “royal way of the cross.”

We say we will walk tomorrow
The path we refuse today,
And still with our lukewarm sorrow
We shrink from the narrow way.

What heeded the chosen ‘eleven’
How the fortunes of life might toss,
As they followed their Master
to heaven By the “royal way of the cross”

Winslow was a direct descendant of John Winslow and Mary Chilton who braved the Atlantic to travel to America on the Mayflower in 1620. Legend has it[citation needed] that Mary was the first female of the little band to set foot in the New World. In 1624 she married John, brother to Edward Winslow (1595–1655), a celebrated Pilgrim leader. [expand title="see more on Octavius Winslow"]

Winslow spent most of his life in England. He pastored a Baptist church on Warwick Road in Leamington Spa, Warwickshire (1839–1858) where he followed Rev. D.J. East. In 1858 he became the founder and first minister of Kensington Chapel, Bath. In 1865 the church became a Union Church (mixed credobaptist and paedobaptist). This latter event probably marks a changing attitude in Winslow who in 1867 left the Baptist pastorate and in 1870 was ordained an Anglican deacon and priest by the Bishop of Chichester. For his remaining years, he served as minister of Emmanuel Church, Brighton, on the south coast. In 1868 he had produced a hymn book for this very congregation. This church was destroyed in 1965 and a Baptist church erected in its place.[/expand]