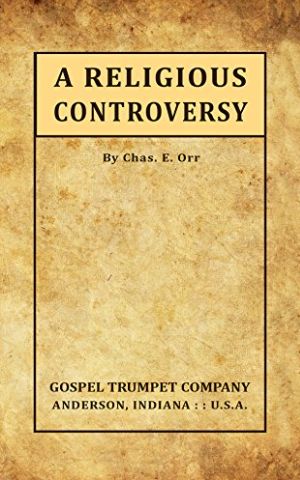 CONTENTS of Orr A Religious Controversy

I cannot find any further information on Charles Orr. I would place him (guessing because I could not find any information about him) probably in the Deeper Life movement/Methodist/Nazarene. Usually, Nazarene authors show up in Nazarene Publishing Houses listings. But Orr seems to be missing as far as biographical information. But I would mention that his works are very sound holiness type works that are straightforward exhortations to live a holier life.

In general, from analyzing his topics of his books, I would say that he was in the Deeper life movement (a break off of the Anglican church under John Wesley, later others from him.) I have found his works in various places on the Internet and none of them know what he was or with whom he was associated either.

(included in the Module Articles by Charles Ebert Orr)