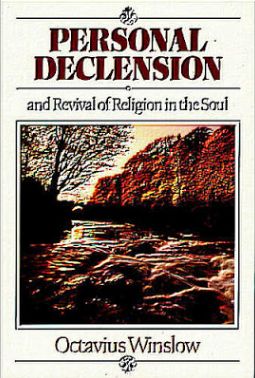 Personal Declension and Revival of Religion in the Soul

That the subject on which this humble volume treats is vastly solemn, and deeply searching, every true believer in Jesus must acknowledge. The existing necessity for such a work has long impressed itself upon the Author’s mind. While other and abler writers are employing their pens, either in defending the outposts of Christianity, or in arousing a slumbering church to an increased intensity of personal and combined action in the great work of Christian benevolence, he has felt that it might but be instrumental, in ever so humble a way, of occasionally withdrawing the eye of the believer from the dazzling and almost bewildering movements around him, and fixing it upon the state of HIS OWN PERSONAL RELIGION, he would be rendering the Christian church a service, not the less needed and important in her present elevated and excited position.
It must be admitted, that the character and the tendencies of the age are not favorable to deep and mature reflection upon the hidden, spiritual life of the soul. Whirled along as the church of God is, in her brilliant path of benevolent enterprise, – deeply engaged in concerting and in carrying out new and far-reaching plans of aggression upon the dominion of sin, – and compelled in one hand to hold the spiritual sword in defense of the faith which, with the other, she is up-building, – but few energies are left, and but little time is afforded, for close, faithful, and frequent dealing with the personal and spiritual state of grace in the soul; which, in consequence of thus being overlooked and uncultivated, may fall into a state of the deepest and most painful declension. “They made me keeper of the vineyards, but my own vineyard have I not kept.” (Son 1:6)
It is, then, the humble design of the writer in the present work, for a while to withdraw the mind from the consideration of the mere externals of Christianity, and to aid the believer in answering the solemn and searching inquiry, – “What is the present spiritual state of my soul before God?” In the following pages he is exhorted to forget the Christian profession he sustains, the party badge he wears, and the distinctive name by which he is known among men, – to turn aside for a brief hour from all religious duties, engagements, and excitement, and to look this question fully and fairly in the face.
With human wisdom and eloquence the Author has not seen fit to load and adorn his work: the subject presented itself to his mind in too solemn and dreadful an aspect for this. The ground he traversed he felt to be so holy, that he had need to put off the shoes from his feet, and to lay aside everything that was not in strict harmony with the spiritual character of his theme. That the traces of human imperfection may be found on every page, no one can be more conscious than the Author, – no one more deeply humbled. Indeed, so affecting to his own mind has been the conviction of the feeble manner in which the subject is treated, that but for a deep sense of its vast importance, and the demand that exists for its discussion in almost any shape, he would more than once have withdrawn his book from the press. May the Spirit of God accompany its perusal with power and unction, and to Him, as unto the Father and the Son, shall be ascribed the glory!

This E-sword module was formatted by wlue777 and original document found at www.gracegems.org