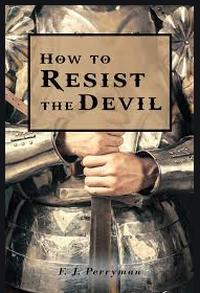 Perryman-How to Resist the Devil, is a 58 page work on resisting Satan, surveying field operation, areas of deception and opposition, and means of victory

Perryman How to Resist the Devil, is a 58 page work on resisting Satan, surveying field operation, areas of deception and opposition, and means of victory

HOW TO RESIST THE DEVIL

Contents of Perryman How to Resist the Devil

Chapter
1. Surveying the Field of Operations 1
2. Areas of Satanic Deception and Opposition 22
3. The Means of Victory 49

A Word of Explanation

The author of this work, F. J. Perryman, lived in England. Apart from some personal glimpses which we have of him through his writing, we have not been able to learn much about him. We have reason to believe, however, that he was not only a contemporary of F. B. Meyer, Evan Roberts, and Mrs. Penn-Lewis, but that he was personally acquainted with them.

A reprint of his booklet is timely. The present generation of Christians has been so conditioned by modern education to relegate the source of all of its problems to the mind and the body that it has almost, if not entirely, ignored the realm of unseen supernatural forces.

We fully recognize that it is not always easy to tell where the flesh leaves off and evil spirits have to be reckoned with in a believer’s life. There is a realm in which the distinctions are not always clear- cut. Sometimes they appear to overlap. Mr. Perryman was aware of this fact and did not look on the devil as the source of all of the believer’s troubles. In this booklet, however, he has emphasized for us that much-neglected aspect of truth—the efforts of Satan and his wicked forces to hinder, and, if possible, destroy the testimony and life of the child of God.
Of late there has been a new interest taken in the subject of Satan and demon activity, but to our knowledge there is no work like this which not only exposes the methods of Satan but at the same time indicates the Biblical method of victory over the enemy.

Some editing has been done on the booklet to bring it into line with present-day printing practices and to emphasize God’s way of deliverance. We have tried to leave largely untouched the author’s style of writing.
We trust this message will help many of God’s people to understand better the forces which militate against them and will at the same time cause them to enjoy a measure of victory such as they have not known before.

Sample Section from the book Perryman How to Resist the Devil

Tempted and Tried by the Devil

I thank God that comparatively early in my life He opened my eyes to what the devil could do; then He showed me my responsibility and what I could do as a “new creature” in Christ Jesus by resisting him. I feel that I owe my life to the use of this truth. I have been sorely tempted, terribly harassed, and driven to despair, feeling helpless, hopeless, and abandoned of God; but by His grace I have risen again and again in the name of the Lord, resisted the devil, and triumphed. Oh, the patience and love of God!

Many Christians have had painful experiences which can be understood only in the light of 1 Peter 5:8, 9, From this passage it is clear that Satan and his confederate hosts ceaselessly, tirelessly,

2
HOW TO RESIST THE DEVIL
maliciously, and deliberately seek the life of the real believer in Christ. All sorts of objections may be voiced against this conclusion, but when the last argument is ended, God’s Word still says, “Your adversary the devil . . . walketh about, seeking whom he may devour; Whom resist steadfast in the faith.”

Indeed the warning is given because of the peril we face. To be “sober” means to be “sane,” to be “mentally self-controlled.” The words “be vigilant” carry the thought of “be awake and watchful.” God alerts us in this passage to the presence in this world of our adversary and to the feet of his wild-beast-like character.

To “Resist” Is As Important As To Be “Filled”

The subject may be one from which you have recoiled, owing to the unwholesome stress laid upon it by some, but that does not alter the truth, unmistakably revealed, that it is as much a command of God to “resist the devil” as it is to “be filled with the Spirit” and to “love one another.” Every believer who knows anything about the filling of the Spirit must eventually be faced with a situation which involves the necessity of resisting the devil. The surge of God’s life through us cannot continue its course unhindered without at some point bringing us definitely into contact and combat with the satanic forces that control the darkness of this world. (Eph. 6:12; 2 Cor. 11:14)

The devil is your adversary. He will never be your friend, though he will pose as such. He will never be off duty, though there may be times when his active opposition may not be as apparent as at other times.

3
HOW TO RESIST THE DEVIL

Satan as a Chameleon

Peter’s admonition is directly applicable to us today. The devil’s character has in no way been altered since Peter, under inspiration, wrote the epistles which bear his name. Satan is still a liar, a murderer, a divider, and a counterfeiter, and he assumes any other role that suits his purpose for the moment.

He goes about “as a roaring lion.” He is on the move. If he appears as “an angel of light” (Eph. 6:12; 2 Cor. 11:14), then the danger is the greater to us. Here also is an added reason for enlightened eyes, released wills, courageous hearts, and endued spirits to rally to the need of our day. By submitting ourselves to God, we will put into force those infallible weapons of victory which have been forged and sealed in the cross of Him who at Calvary cast out “the prince of this world” (John 12:31), completely stripped off the (evil) principalities and powers, and “made a shew of them openly, triumphing over them in it” (Col. 2:15).

Perryman How to Resist the Devil, is a 58 page work on resisting Satan, surveying field operation, areas of deception and opposition, and means of victory