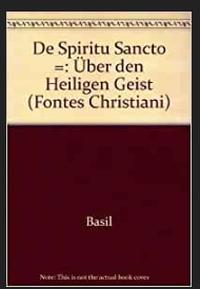 De Spiritu Sancto (Basil) is an old work by the Church Fathers, 30 chs. which discusses the Holy Spirit in relationship to the Trinity.

De Spiritu Sancto (Basil) is an old work by the Church Fathers, 30 chs. which discusses the Holy Spirit in relationship to the Trinity. Basil (Catholic) is recognized as setting up the monastic life which focused on community life, liturgical prayer, and manual labor.

Basil of Caesarea, also called Saint Basil the Great (Greek: Ἅγιος Βασίλειος ὁ Μέγας, Ágios Basíleios o Mégas; Coptic: Ⲡⲓⲁⲅⲓⲟⲥ Ⲃⲁⲥⲓⲗⲓⲟⲥ; 330[8] – January 1 or 2, 379), was the bishop of Caesarea Mazaca in Cappadocia, Asia Minor (modern-day Turkey). He was an influential theologian who supported the Nicene Creed and opposed the heresies of the early Christian church, fighting against both Arianism and the followers of Apollinaris of Laodicea. His ability to balance his theological convictions with his political connections made Basil a powerful advocate for the Nicene position. In addition to his work as a theologian, Basil was known for his care of the poor and underprivileged. Basil established guidelines for monastic life which focus on community life, liturgical prayer, and manual labor. Together with Pachomius, he is remembered as a father of communal monasticism in Eastern Christianity. He is considered a saint by the traditions of both Eastern and Western Christianity. Basil, Gregory of Nazianzus, and Gregory of Nyssa are collectively referred to as the Cappadocian Fathers. The Eastern Orthodox Church and Eastern Catholic Churches have given him, together with Gregory of Nazianzus and John Chrysostom, the title of Great Hierarch. He is recognized as a Doctor of the Church in the Roman Catholic Church. He is sometimes referred to by the epithet Ouranophantor (Greek: Οὐρανοφάντωρ), “revealer of heavenly mysteries”.[9] — https://www.youtube.com/watch?v=lpRgXFnaMXY

1. Prefatory remarks on the need of exact investigation of the most minute portions of theology.
2. The origin of the heretics’ close observation of syllables.
3. The systematic discussion of syllables is derived from heathen philosophy.
4. That there is no distinction in the scriptural use of these syllables.
5. That through whom is said also in the case of the Father, and of whom in the case of the Son and of the Spirit.
6. Issue joined with those who assert that the Son is not with the Father, but after the Father. Also concerning the equal glory.
7. Against those who assert that it is not proper for with whom to be said of the Son, and that the proper phrase is through whom.
8. In how many ways Through whom is used; and in what sense with whom is more suitable. Explanation of how the Son receives a commandment, and how He is sent.
9. Definitive conceptions about the Spirit which conform to the teaching of the Scriptures.
10. Against those who say that it is not right to rank the Holy Spirit with the Father and the Son.
11. That they who deny the Spirit are transgressors.
12. Against those who assert that the baptism in the name of the Father alone is sufficient.
13. Statement of the reason why in the writings of Paul the angels are associated with the Father and the Son.
14. Objection that some were baptized unto Moses and believed in him, and an answer to it; with remarks upon types.
15. Reply to the suggested objection that we are baptized into water. Also concerning baptism.
16. That the Holy Spirit is in every conception separable from the Father and the Son, alike in the creation of perceptible objects, in the dispensation of human affairs, and in the judgment to come.
17. Against those who say that the Holy Ghost is not to be numbered with, but numbered under, the Father and the Son. Wherein moreover there is a summary notice of the faith concerning right sub-numeration.
18. In what manner in the confession of the three hypostases we preserve the pious dogma of the Monarchia. Wherein also is the refutation of them that allege that the Spirit is subnumerated.
19. Against those who assert that the Spirit ought not to be glorified.
20. Against those who maintain that the Spirit is in the rank neither of a servant nor of a master, but in that of the free.
22. Establishment of the natural communion of the Spirit from His being, equally with the Father and the Son, unapproachable in thought.
23. The glorifying of the enumeration of His attributes.
24. Proof of the absurdity of the refusal to glorify the Spirit, from the comparison of things glorified in creation.
25. That Scripture uses the words in or by, ἐ ν , cf. note on p. 3, in place of with. Wherein also it is proved that the word and has the same force as with.
26. That the word in, in as many senses as it bears, is understood of the Spirit.
27. Of the origin of the word with, and what force it has. Also concerning the unwritten laws of the church.
28. That our opponents refuse to concede in the case of the Spirit the terms which Scripture uses in the case of men, as reigning together with Christ.
29. Enumeration of the illustrious men in the Church who in their writings have used the word with.
30. Exposition of the present state of the Churches.

De Spiritu Sancto (Basil) is an old work by the Church Fathers, 30 chs. which discusses the Holy Spirit in relationship to the Trinity.