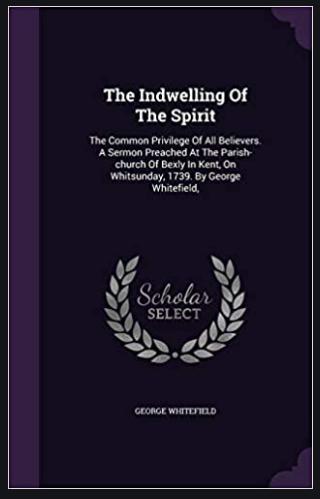 Whitefield-Indwelling Common Privilege of all believers is a sermon by Whitefield (Methodist) on the indwelling of the Holy Spirit. His point is that this is “common” among all believers. It does not happen after salvation to some believers only.

Whitefield-Indwelling Common Privilege of all believers is a sermon by Whitefield (Methodist) on the indwelling of the Holy Spirit. His point is that this is “common” among all believers. It does not happen after salvation to some believers only.

Whitefield – Indwelling of the Spirit, the Common Privilege of All Believers

George Whitefield 27 December [O.S. 16 December] 1714 – 30 September 1770), also spelled Whitfield, was an English Anglican cleric and evangelist who was one of the founders of Methodism and the evangelical movement.[1][2]

Born in Gloucester, he matriculated at Pembroke College at the University of Oxford in 1732. There he joined the "Holy Club" and was introduced to the Wesley brothers, John and Charles, with whom he would work closely in his later ministry. Whitefield was ordained after receiving his Bachelor of Arts degree. He immediately began preaching, but he did not settle as the minister of any parish. Rather he became an itinerant preacher and evangelist. In 1740, Whitefield traveled to North America, where he preached a series of revivals that became part of the "Great Awakening". His methods were controversial and he engaged in numerous debates and disputes with other clergymen. In college, George Whitefield was a friend to the two Wesley brothers, Charles and John.

Whitefield received widespread recognition during his ministry; he preached at least 18,000 times to perhaps 10 million listeners in Great Britain and the American colonies. Whitefield could enthrall large audiences through a potent combination of drama, religious rhetoric, and imperial pride.[3]

Whitefield - Indwelling of the Spirit, the Common Privilege of All Believers