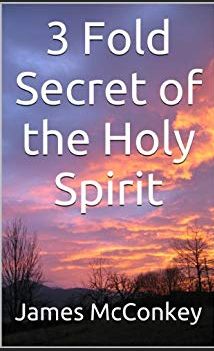 Table of Contents of Three-Fold Secret of the Holy Spirit

McConkey’s books are rare and wonderfully helpful jewels on the Christian life. This one is no exception, and was considered the “best” book on the subject by William Bordon, a much-used young adult who made such a difference in former times and whose biography was written by the daughter-in-law of Hudson Taylor. Bordon carried it with him everywhere he went—and for good reason as you will discover! I personally had this book for many years, having found it in a used bookstore, but only picked it up to read as a result of my pastor doing a series on the Holy Spirit. Was I ever surprised and blessed, and found a personal application of the first secret—”you already have the Holy Spirit”—in my having had the book for so many years and not having read and been blessed by it.

James McConkey was a native of Pennsylvania, graduated from Princeton College (now University) in 1880 as president of his class, and later studied law and was admitted to the bar. He was influential in the work of YMCA and in the founding of Africa Inland Mission. An invalid most of his life, he died in 1937 at the age of 79.

This book was originally published by the Silver Publishing Company and offered free to anyone requesting a copy. It was copyrighted in 1897.

Note: There are other versions of this work on the Internet which lack the last of the three chapters. This present version is complete. I had to hand copy it from an image, some 100 pages. Please consider a donation to me for this work with I did.

The three-fold secret of the Holy Spirit is an excellent short work about the Holy Spirit in the Christian's life. He looks at His Incoming, His Fulness, and His Constant Manifestation. Note: There are other versions of this work on the Internet which lack the last of the three chapters. This present version is complete. I had to hand copy it from an image, some 100 pages.