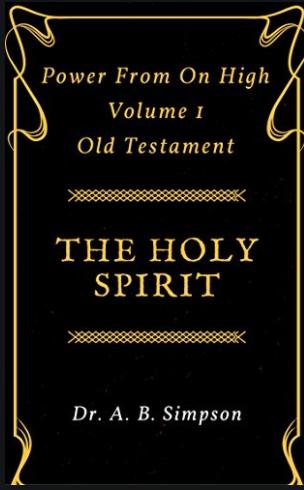 In Simpson Holy Spirit Vol 1 Simpson (M&CA) presents symbols of the Holy Spirit and some studies of the Holy in some books (Judges, Proverbs, Joel, Isaiah, Ezekiel, Jeremiah, etc). This volume 1 the Old Testament. See Volume 2, the New Testament.

In this 25 chapter work, Simpson (M&CA) presents symbols of the Holy Spirit and some studies of the Holy in some books (Judges, Proverbs, Joel, Isaiah, Ezekiel, Jeremiah, etc).

Contents of the Holy Spirit by AB Simpson

Albert Benjamin Simpson (December 15, 1843 – October 29, 1919), also known as A. B. Simpson, was a Canadian preacher, theologian, author, and founder of the Christian and Missionary Alliance (C&MA), an evangelical denomination with an emphasis on global evangelism.

Simpson was born in Bayview, near Cavendish, Prince Edward Island, Canada, as the third son and fourth child of James Simpson, Jr. and Janet Clark.[1] Author Harold H. Simpson has gathered an extensive genealogy of Cavendish families in Cavendish: Its History, Its People. His research establishes the Clark family (A. B. Simpson's mother's side) as one of the founding families of Cavendish in 1790, along with the Simpson family, and he traces common ancestors between Albert B. Simpson and Lucy Maud Montgomery, the author of Anne of Green Gables.

The young Albert was raised in a strict Calvinistic Scottish Presbyterian and Puritan tradition. His conversion of faith began under the ministry of Henry Grattan Guinness, a visiting evangelist from Ireland during the revival of 1859.[2] Simpson spent some time in the Chatham, Ontario area, and received his theological training in Toronto at Knox College, University of Toronto. After graduating in 1865, Simpson was subsequently ordained in the Canada Presbyterian Church, the largest of the Presbyterian groups in Canada that merged after his departure for the United States. At age 21, he accepted a call to the large Knox Presbyterian Church (closed in 1971) in nearby Hamilton, Ontario.

In December 1873, at age 30, Simpson left Canada and assumed the pulpit of the largest Presbyterian church in Louisville, Kentucky, the Chestnut Street Presbyterian Church. It was in Louisville that he first conceived of preaching the gospel to the common man by building a simple tabernacle for that purpose. Despite his success at the Chestnut Street Church, Simpson was frustrated by their reluctance to embrace this burden for wider evangelistic endeavor.

In 1880, Simpson was called to the Thirteenth Street Presbyterian Church in New York City where he immediately began reaching out to the world with the gospel. By 1881, after only two fruitful years at Thirteenth Presbyterian, he resigned in order to begin an independent gospel ministry to the many new immigrants and the neglected masses of New York City.[3] Beside active evangelistic work in the church, he published in 1882 a missionary journal, The Gospel in All Lands, the first missionary journal with pictures.[4] Simpson also founded and began publishing an illustrated magazine entitled The Word, Work, and World. By 1911, this magazine became known as The Alliance Weekly, then Alliance Life. It is the official publication of The Christian and Missionary Alliance, in the US and Canada.

In 1882, Simpson began informal training classes in order to reach "the neglected peoples of the world with the neglected resources of the church".[5] By 1883, a formal program was in place and ministers and missionaries were being trained in a multi-cultural context (This school was the beginning of Nyack College and Alliance Theological Seminary). In 1889, Simpson and his church family moved into their new home at the corner of 44th St. and 8th Av. called the New York Tabernacle. This became the base not only of his ministry of evangelism in the city but also of his growing work of worldwide missions.

Simpson's disciplined upbringing and his natural genius made him a most effective communicator of the Word of God. He preached a unique gospel of Jesus which became known as the Fourfold Gospel: "Jesus our Savior, Sanctifier, Healer, and Coming King".[6] The Fourfold Gospel is symbolized in the logo of the C&MA : the Cross, the Laver, the Pitcher and the Crown. He came to his special emphasis in ministry through his absolute Christ-centeredness in doctrine and experience.

Plagued by illness for much of his life since childhood, Simpson believed he experienced divine healing after understanding it to be part of the blessing of abiding in Christ as Life and healing. He emphasized healing in his Fourfold Gospel and usually devoted one meeting a week for teaching, testimonies and prayer on these lines. Although such teaching isolated him (and the C&MA) from the mainline churches that either did not emphasize or outright rejected healing, Simpson was uncompromising in his beliefs.

Simpson's heart for evangelism was to become the driving force behind the creation of the C&MA. Initially, the Christian and Missionary Alliance was not founded as a denomination, but as an organized movement of world evangelism. Today, the C&MA plays a leadership role in global evangelism.

In his 1890 book, A Larger Christian Life, Simpson discussed his vision for the church:

He is showing us the plan for a Christian church that is much more than an association of congenial friends to listen once a week to an intellectual discourse and musical entertainment and carry on by proxy a mechanism of Christian work; but rather a church that can be at once the mother and home of every form of help and blessing which Jesus came to give to lost and suffering men, the birthplace and the home of souls, the fountain of healing and cleansing, the sheltering home for the orphan and distressed, the school for the culture and training of God's children, the armory where they are equipped for the battle of the Lord and the army which fights those battles in His name. Such a center of population in this sad and sinful world![7]
Simpson composed the lyrics of over 120 hymns,[8] 77 of which appear in the C&MA's 1962 hymnal, Hymns of the Christian Life, co-edited with R. Kelso Carter.[9]

His missionary vision is illustrated by these words of his hymn, "The Missionary Cry":Read More

The Master's coming draweth near.
The Son of Man will soon appear,
His Kingdom is at hand.
But ere that glorious day can be,
The Gospel of the Kingdom, we
Must preach in every land.[10]

During the beginning of the twentieth century, Simpson became closely involved with the growing Pentecostal movement, an offshoot of the Holiness movement. It was common for Pentecostal pastors and missionaries to receive their training at the Missionary Training Institute, now Nyack College, Nyack, New York, that Simpson founded. Because of this, Simpson and the C&MA had a great influence on Pentecostalism, in particular the Assemblies of God and the Church of the Foursquare Gospel. This influence included evangelistic emphasis, C&MA doctrine (especially on healing and his articulation of a Fourfold Gospel), and Simpson's hymns and books.[11]

A severe division developed within the C&MA organization over "the initial evidence doctrine" within Pentecostalism. While Simpson and the C&MA wholeheartedly embraced the Filling of the Holy Spirit and the spiritual gifts, including speaking with tongues, they rejected the position that tongues was the only initial evidence for that Baptism experience; instead, they held that the primary evidence is the Fruit of the Holy Spirit and that "fruitful ministry" is another strong proof.[12]

A number of C&MA churches bear Simpson's name, including (i) Simpson University in Redding, California, (ii) the Albert B. Simpson school in Lima, Peru, (iii) the A. B. Simpson Alliance School in Zamboanga City, Philippines, and (iv) the Simpson Memorial Church (established in 1923) in Jamalpur, Ahmedabad, India. A. B. Simpson and his wife, Margaret (née Margaret L. Henry; 1841–1924), are buried on the Rockland County Campus of Nyack College in Nyack, New York.

Works by Simpson in theWord Format

More Works on the Holy Spirit

See original pdf of this work

Notes on the Holy Spirit

About the Holy Spirit

More on the Holy Spirit

Tag Cloud for the Holy Spirit