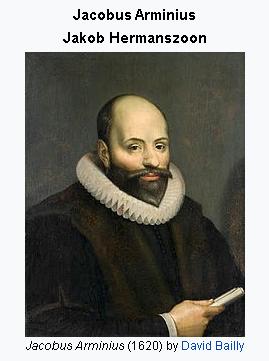 A LETTER ON THE SIN AGAINST THE HOLY GHOST
TO JOHN UYTENBOGARD, HIS MOST DEAR AND PECULIARLY BELOVED BROTHER IN CHRIST, JAMES ARMINIUS WISHES HEALTH AND HIS WELFARE THROUGH CHRIST

Most Friendly Of Mankind:

As You intend soon to preach before the members of your church on The Sin against the Holy Ghost, you request that I will disclose to you my meditations and musings on that subject, on which you had also previously asked my opinion; but at that time, it was not in my power to comply with your request; for I had formed no distinct conception in my mind respecting it, neither have my sentiments upon it yet attained to any certain and full persuasion. But my slight musings and meditations, I neither feel any desire of denying to you, nor would it be my duty to withhold them from one to whom I have long ago transferred the plenary fight of requiring and even commanding any thing from me. Nor will I suffer myself to be seduced from this desire of obeying you by any false and rustic shame, though I know that my contemplations on this question, are such as cannot satisfy you, since, in fact, they are not much approved by myself. For, of what kind soever they may be, I am aware that they deserve to obtain some excuse, as they are concerning that question, than which scarcely any one of greater difficulty can be found in the whole Scripture, as St. Augustine testifies when professedly treating upon this subject, (tom. 19, fol. 9,) in his explication of Matthew 12:31,32. Besides, I hope and feel fully persuaded, that you will so polish these, my rough notes, that I may afterwards receive them from you not only with interest, but also others which will be able entirely to complete my wishes.

But I will not at present examine what St. Augustine has produced on the same passage, when writing about this sin; nor what is found on this subject in the writings of other authors, whether among the ancients or in our own times, lest I should be unnecessarily prolix, especially as you are yourself extremely well furnished with their works, and are ready to make the necessary inquiry into their sentiments. I will transcribe for you my own meditations, not in that order which is suitable to the nature of the thing itself, (for how is it possible for me to do this, when it is not fully known by me?) but in the order which it is possible for me to observe in the confusion of various thoughts.

It will not be useless, in the first place, to prefix to this investigation those passages of Scripture in which mention is made of this sin, or in which it seems at least to be made.

“Wherefore I say unto you, All manner of sin and blasphemy shall be forgiven unto men; but the blasphemy against the Holy Ghost shall not be forgiven unto men. And whosoever speaketh against the Son of Man, it shall be forgiven him; but whosoever speaketh against the Holy Ghost, it shall not be forgiven him, neither in this world nor in the world to come. (Mat 12:31-32.) “Verily I say unto you All sins shall be forgiven unto the sons of men, and blasphemies wherewithsoever they shall blaspheme; but he that shall blaspheme against the Holy Ghost, hath never forgiveness, but is in danger of eternal damnation.” (Mar 3:28-29.) “and whosoever shall speak a word against the Son of man, it shall be forgiven him; but unto him that blasphemeth against the Holy Ghost, it shall not be forgiven.” (Luk 12:10.) There are, besides, two passages in the epistle to the Hebrews, the first of them in the sixth chapter, the other in the tenth, which it seems possible to refer to this subject without any great detriment. “For it is impossible for those who were once enlightened, and have tasted of the heavenly gift, and were made partakers of the Holy Ghost, and have tasted the good word of God, and the powers of the world to come, if they shall fall away, to renew them again to repentance; seeing they crucify to themselves the Son of God afresh, and put him to an open shame? (Heb 6:4-6.) “He that despised Moses’ law, died without mercy under two or three witnesses; of how much sorer punishment, suppose ye, shall he be thought worthy, who hath trodden under foot the Son of God, and hath counted the blood of the covenant, wherewith he was sanctified, an unholy thing, and hath done despite unto the Spirit of grace?” (Heb 10:28-29.) To these may be added a passage from St. John’s first epistle: “If any man see his brother sin a sin which is not unto death, he shall ask, and he shall give him life for them that sin not unto death. There is a sin unto death: I do not say that he shall pray for it?” (1Jo 5:16.) Let the following passage also, from the epistle to the Hebrews, be added, for the sake of explanation, not because it is on exactly the same subject:
… continued in the module

Jacobus Arminius (October 10, 1560 – October 19, 1609), the Latinized name of Jakob Hermanszoon,[a] was a Dutch theologian from the Protestant Reformation period whose views became the basis of Arminianism and the Dutch Remonstrant movement. He served from 1603 as professor in theology at the University of Leiden and wrote many books and treatises on theology.

Following his death, his challenge to the Reformed standard, the Belgic Confession, provoked ample discussion at the Synod of Dort, which crafted the five points of Calvinism in response to Arminius's teaching.

Arminius, was born in 1559 or 1560 in Oudewater, Utrecht. He became an orphan while still young. His father Herman, a manufacturer of weapons, died, leaving his wife a widow with small children.[1] He never knew his father, and his mother was killed during the Spanish massacre at Oudewater in 1575.

The child was adopted by Theodorus Aemilius, a priest inclined towards Protestantism. Around 1572 (the year Oudewater was conquered by the rebels), Arminius and Aemilius settled in Utrecht. The young Jacobus studied there, probably at the Hieronymusschool. After the death Aemilius (1574 or 1575), Arminius became acquainted with the mathematician Rudolph Snellius, also from Oudewater. The latter brought Arminius to Marburg and enabled him to study at the Leiden University, where he taught.[2] In 1576, Arminius was registered as a liberal arts student at the newly opened Leiden University.

Arminius remained a student at Leiden from 1576 to 1582. Although he enrolled as a student in Liberal Arts, this allowed him to pursue an education in theology, as well. His teachers in theology included Calvinist Lambertus Danaeus, Hebrew scholar Johannes Drusius, Guillaume Feuguereius (or Feugueires, d. 1613), and Johann Kolmann. Kolmann is now known for teaching that the overemphasis of God's sovereignty in high Calvinism made God "a tyrant and an executioner".[3] Although the university in Leiden was solidly Reformed, it had influences from Lutheran, Zwinglian, and Anabaptist views in addition to Calvinism. One Leiden pastor (Caspar Coolhaes) held, contra Calvin, that civil authorities did have jurisdiction in some church affairs, that it was wrong to punish and execute heretics, and that Lutherans, Calvinists, and Anabaptists could unite around core tenets.[3] The astronomer and mathematician Willebrord Snellius used Ramist philosophy in an effort to encourage his students to pursue truth without over reliance on Aristotle.[3] Under the influence of these men, Arminius studied with success and may have had seeds planted that would begin to develop into a theology that would later question the dominant Reformed theology of John Calvin. The success he showed in his studies motivated the merchants guild of Amsterdam to fund the next three years of his studies.

In 1582, Arminius began studying under Theodore Beza at Geneva. He found himself under pressure for using Ramist philosophical methods, familiar to him from his time at Leiden. Arminius was publicly forbidden to teach Ramean philosophy. After this difficult state of affairs, he moved to Basel to continue his studies.[2]

He continued to distinguish himself there as an excellent student. In 1583 Arminius was contemplating a return to Geneva when the theological faculty at Basel spontaneously offered him a doctorate.[4] He declined the honor on account of his youth (he was about 24)[5] and returned to the school in Geneva to finish his schooling in Geneva under Beza.

Arminius On the Sin Against the Holy Spirit
Arminius-On-The-Sin-Against-the-Holy-Spirit.gbk_.twm
Version: 1