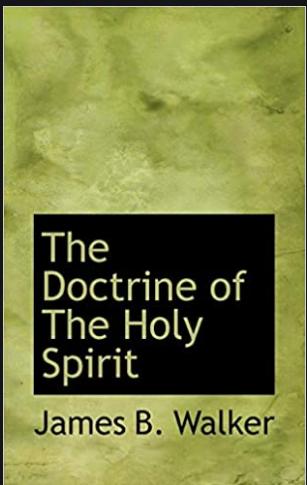 THE DOCTRINE THE HOLY SPIRIT, OR

CONTENTS  of Walker Doctrine of the Holy Spirit

CHAPTER 1. THE HOLY SPIRIT IN THE OLD TESTAMENT.
1. The mystery of life …. 17
2. The doctrine of the Spirit , a peculiarity of the Bible 19
3. The doctrine as developed in the Mosaic dispensation 20
24

CHAPTER II. THE RELATIVE PLACE OF THE SPIRIT AND THE WORD IN THE ECONOMY OF THE DIVINE MIND .
4. All mind generically the same
5. Self consciousness of the mental constitution
6. The Scripture view of the Logos , or Son of the Divine Mind .
7. Views of some of the best Christian thinkers in harmony with this exposition. .
8. Mind manifested only by its Logos , or out – birth .
9. God becomes imminently and effectively personal only in Christ. .
10. The Holy Spirit uses the personality of Christ in the work of Redemption. … 41
31

CHAPTER IV. THE ENDOWMENT AND SUPERVISION OF THE APOSTLES BY THE HOLY SPIRIT .
16. The disciples in the Old Testament state , until after the outpouring of the Spirit
17. Peter ‘ s precipitancy and error in acting before the time .
18. Christ ‘ s choice of the apostles
19. Promise of Christ ‘ s special presence by the Spirit , in answer to their supplication.. .
20. All essential truth spoken by Christ to be preserved by the suggestion of the Spirit.. .
21. The spiritual sense promised to the apostles. 63
22. Further exposition of the promise that greater light and power would be given by the Spirit after Christ ‘ s ascension …. 66
28. The endowment of the apostles with special powers and prerogatives. .. .. 71
24. The apostles affirm their consciousness of special endowment .
25. The Providence of God working together with the Spirit in furthering the gospel by the instrumentality of the apostles. .. .. 76

CHAPTER V. THE UNION OF THE WORD AND SPIRIT IN THE PROCESS OF SANCTIFICATION .
26. Does an increase of light imply an increase of spiritual power ?. 86
27. Of the Living Word as a rule of duty 86
28. Necessity in reason for a perfect rule of human duty 88
29. A perfect rule of life the only principle of moral progress. .. … 92
30. The truth being given in the life and precept of Christ , the second necessary thing is the work of the Spirit. .. … 94
31. Rationale of the Spirit ‘ s operation in connection with the truth. .. .. 96
32. The preceding views illustrated by experience 100
33. The sum of preceding deductions , 101
34. The union of the Word and Spirit necessary in the process of conviction and sanctification.. 103
35. The preceding views accord with the relations of the Word and Spirit , as they exist in both the finite and the Infinite mind. … 105
36. The preceding views confirmed by the teaching of the Scriptures. .. .. 106

CHAPTER VI. THE WORK OF CHRIST BY THE DIVINE SPIRIT IN THE MINDS OF BELIEVERS .
37. The two fold office – work of the Spirit.. 111
38. The experimental import of the statement that the Spirit shall not speak of Himself .
39. By exhibiting Christ the Spirit likewise exhibits the Father to the soul .
40. The Spirit witnesses to the truth of Divine Revelation.. .
41. The nature of the Spirit ‘ s witness. .
42. The influence of the Spirit upon the faculties of the mind separately considered.. .
43. The duty of prayer annexed to the doctrine of the Spirit. 131
44. The conditions upon which the influence of the Holy Spirit is granted. … 133
xvi .
45. Availing prayer is offered to God in the name of Christ. 139
46. The sum of preceding sections.. 142

MY DEAR SIR,
With great respect for your candor as a writer on theological subjects , permit me to commend to your attention this treatise on the Doctrine of the Spirit .
JAMES B. WALKER
xii

offer it as a contribution designed to promote intelligent faith , and unity of faith among the various denominations of believing people. We do not hope that the views here presented will be at once recognized by every reader as the true exposition of the doctrine of the Spirit ; but after mature discussion of the principles herein. propounded , we have no doubt that these pages will aid in accomplishing the end for which they have been written — to glorify the true God , manifested in Christ and revealed through Christ , by the Holy Spirit .

In judging of the views upon which he is about to enter, the reader is solicitously desired to refer the adjudication of any doubt that may arise in his mind to the arbitrament of the Word of God , and to ” search the scriptures whether these things be so. ”

This work is available in our site store. Please go there to download it.
Walker Doctrine of the Holy Spirit

James Barr Walker was born in Philadelphia, Pennsylvania on July 29, 1805. His father died when James was a child, and he and his widowed mother resided near Pittsburgh. Here Walker worked in a factory, was errand-boy in a country store, and then labored four years in a printing-office. At the age of twenty he walked to New York, where he became clerk in the office of Mordecai M. Noah, and he was afterward a teacher in New Durham, New Jersey.

Walker then studied law in Ravenna, Ohio, was graduated at Western Reserve college in 1831. He later edited the Ohio Observer at Hudson, the Watchman of the Valley at Cincinnati, and the Watchman of the Prairies at Chicago (later the Advance). He also engaged in the publication and sale of books, but abandoned it for the ministry. While in Cincinnati Walker was associated with Lane Theological Seminary and likely met Jonathan Blanchard at this time. In 1841 was licensed to preach by the presbytery of Chicago.

After his ordination he lived in Mansfield, Ohio, where he established a private asylum for orphans, and he was for some time acting pastor of a church in Sandusky. He was lecturer on the harmony between science and revealed religion at Oberlin College and Chicago Theological Seminary. Western Reserve College gave him the degree of D.D. Walker was professor of of  Belles Lettres and Intellectual Philosophy at Wheaton College from 1870-1887. He also served on the Board of Trustees from 1876-1885.

Dr. Walker was the author of The Philosophy of the Plan of Salvation, published anonymously under the editorship of Professor Calvin E. Stowe (Boston, 1855), which went through several editions in England, and has been translated into five foreign languages, including Hindustanee. He also wrote A Short and Easy Method with the Universalists (Cincinnati, 1842); American slavery and British Christians (London, 1854); God revealed in Nature and in Christ [in opposition to theories of evolution] (1855); Philosophy of Scepticism and Ultraism (1857) ; Philosophy of the Divine Operation in the Redemption of Man (London, 1862); Poems (1862) ; Living Questions of the Age (Chicago, 1869); Doctrine of the Holy Spirit (1870); Poetry of Reason and Conscience (Chicago, 1871); The Bible in School (Chicago, 1876); Experiences of Pioneer Life in the Early Settlements and Cities of the West (Chicago, 1881); and Jerusalem and Bethlehem (Cairo, 1918).

(adapted from Appleton's Cyclopedia of American Biography)
taken from http://a2z.my.wheaton.edu/faculty/james-barr-walker