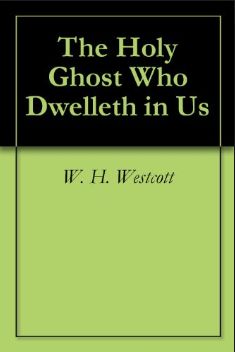 Westcott’s work, the Holy Ghost who dwelleth in us, about the Holy Spirit is a classic work that looks at the Spirit in the new birth, the abounding new life he gives the believers, the Spirit’s Sealing and Anointing the believer, the Spirit as the Comforter, the Earnest of the Spirit, and the Baptism of the Holy Spirit. We have added download links to more related works.

The Holy Ghost Who Dwelleth in Us

The Holy Ghost Who Dwelleth in Us
by WH Westcott

The Holy Spirit occupies a very special place in relation to Christians, distinct from anything set forth in Old Testament times or enjoyed by Old Testament saints; distinct from what was enjoyed by the disciples who companies with the Lord previous to His death, resurrection, and ascension; and distinct from what will be wrought in men (Israelites and Gentiles) after Christians are gone from the earth to the Lord; when the time will have come for the millennial reign of Christ, and its attendant glory and blessing.

Table of Contents of the Holy Ghost who dwelleth in Us

1. Introductory
2. The Spirit-Birth
3. The Springing Fountain and the Spreading Rivers
4. The Comforter
5. The Seal
6. The Earnest
7. The Anointing
8. The Baptism of the Holy Ghost
9. Conclusion

William Henry Westcott, whose 65 pieces of written ministry we have preserved to us here, was a Christian of great faith and faithfulness. His Grandfather was Rev. John Westcott of Outwood Surrey. His father was Lemuel A. Westcott who ran a boys school called Ebenezer Lodge at Lingfield Surrey. He had two brothers called Upton and Walter and a sister called Edith. The Lord led him to give up his secular occupation in 1889 with the Congo in view, and after five years of ministry in Great Britain and two in South Africa, he travelled thence to the mouth of the River Congo. His brother, Upton, arrived from England on December 30th, 1896. He arrived from South Africa three weeks later.

By that time a railway had been commenced, but the brothers had 100 miles to walk, and both suffered severely from fever. They were given permission to settle about 12 miles below Lusambo, at a place called Inkongo. They reached that place on May 18th, 1897, and began to learn the language, which had never been put in writing, and as the natives knew no language but their own, one can imagine the difficulty of acquiring it. The rules of grammar were gradually puzzled out by Mr. W. H. Westcott, so that now it would be possible to learn the language before going to Africa. The translation of the Bible was commenced, blank spaces being left for words which in some cases were not discovered until long afterwards, and a few simple hymns written, while the boys and young men working on the place were given lessons in reading and writing, a thing altogether new to them.

In 1900 Mr. W. H. Westcott visited England, married Miss A. Pudney, of Port Elisabeth, South Africa, and returned with her to Inkongo. His brother then came home and married Miss Edith Anning, of Leeds, in 1902, but they had to return home next year as Mr. Upton Westcott was seriously ill and his life was only saved by an operation. The outlook early in 1904 was not a bright one. It was doubtful if Mr. Upton Westcott would be able to return, and Mr. and Mrs. W. H. Westcott at Inkongo suffered severely from malaria. No natives had been baptized, though a few were undoubtedly converted, had given up their fetishes, and were seeking to follow the Lord.

On the 1st April 1904, Mr. H. Wilson, of Stratford-on-Avon, left England and arrived at Inkongo nine weeks later. Mr. and Mrs. Upton Westcott followed later in the year, and Mr. W. H. Westcott was able to give more time to language work and translation. As the new worker was an expert typist, he was able to save Mr. Westcott much time by copying for him two dictionaries of more than 500 pages each, most of the Bible as it was translated, and a hymn book. Most of the 145 hymns now in the hymn book were written by Mr. W. H. Westcott. Numbers increased in school, and all the five missionaries helped in the teaching. An extract from a diary dated 4th January 1905, reads as follows: “Mrs. Upton Westcott had a few girls to school. We hope it will be the beginning of a girls´ school and much besides.” A huge school work has been carried on over the century since this time, all with the object of enabling the people to read the Bible themselves.

In March of that year, the first baptism took place, and a great crowd assembled at the river as two young men, Kimpanga and Kandolo confessed their faith in Christ and their desire to be identified with Him. (These devoted workers had worked for seven years before they saw this fruit for their labors — marvelous persistence — now we can say that the Lord has saved, and established in the truth of Scripture, tens of thousands of Congolese people through this work of faith.) In July Mr. and Mrs. W. H. Westcott left for a furlough, and both badly needed it after all the fevers and hardships they had suffered. Mrs. Westcott was indeed brave to go to Inkongo as things were in those days. No ladies had been in that district before, and conditions were such as can hardly be realized in these days. The three who remained suffered from much fever, and it seems strange now to read such entries as these: “Temperature 104, but went to school.” “No salt for a long time; boiled some dirty old sacks and managed to get a little for cooking.” The following extract will show what traveling was like:

“Wretched road and filthy mud; both slept badly at night on account of thousands of fleas. Arrived half dead; Mr. Westcott´s clothes were torn and he staggered like a drunken man.”

Many well-populated towns were visited where the Gospel had never been heard, Mrs. Upton Westcott decided to go with her husband. She returned very tired with the hard journey, had a bad attack of malaria and then Blackwater fever or Haematuria, and passed away on 6th August, to the sorrow of all. She was a devoted worker, a splendid teacher and organizer and was loved by everyone who knew her.

In 1910 Mr. W. H. Westcott, with Mrs. Westcott and two children — Bryan and Minnie, went home (two other children died in the Congo), and the following year the New Testament was printed. No praise could be too high for Mr. Westcott´s skill as a translator. In 1912 Mr. and Mrs. W. H. Westcott went out again, leaving their two children at home. In 1916 they returned to England, they then stayed at home to complete the Old Testament, and neither he nor Mrs. Westcott went to the Congo again. His brother Upton, who went blind in 1918, continued in the Congo until 1929 where he died, he was knighted by the King of Belgium.

Westcott - Holy Ghost that dwells within Us
westcott-holy-ghost-dwelleth-in-us.gbk_.twm
Version: 1.2

Westcott's work, the Holy Ghost who dwelleth in us, about the Holy Spirit is a classic work that looks at the Spirit in the new birth, the abounding new life he gives the believers, the Spirit's Sealing and Anointing the believer, the Spirit as the Comforter, the Earnest of the Spirit, and the Baptism of the Holy Spirit. We have added download links to more related works.
Contents
1. Introductory
2. The spirit-birth
3. The springing fountain and the spreading rivers
4. The comforter
5. The seal
6. The earnest
7. The anointing
8. The baptism of the holy ghost
9. Conclusion