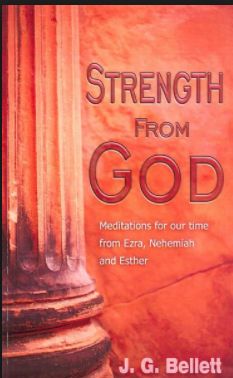 Bellett’s Strength from God Meditations for our Time from Ezra, Nehemiah, and Esther. These are devotional type meditations on these people and their ministries and places in Christian History.

Strength From God: Meditations for Our Time From Ezra, Nehemiah and Esther

Strength From God: Meditations for Our Time From Ezra, Nehemiah and Esther

Contents of Strength from God

1. Judah’s Captivity in Babylon (from Strength from God)

2. The Captives Returned to Jerusalem

3. The Effect of the Humbling

4. Strength and Separation (From Strength from God)

Strength from God
Fresh Separation to God
A Purged Vesse 1

5. The Builders of the Wall

A Moral Process
Obedient Listeners
Learning to do WelL

7. The Effect of Obedience

Dedication
What is the Wall?
Painful Exercise
Fresh Power and Obedience
Moral Degradation

8. The Dispersed Among the Gentiles

Sudden Reappearance
Foreshadows of the Beast
The Decree

God Unseen and at Work
The Judgment of God

The Returned Captives
Grace to the Whole World
The Dispersed People