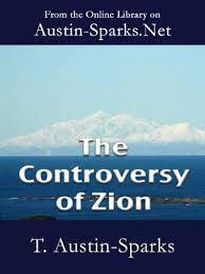 Austin-Sparks The Controversy of Zion is a short two chapter work on Israel becoming a nation in and of itself like it was in the Old Testament.

Austin-Sparks The Controversy of Zion is a short two chapter work on Israel becoming a nation in and of itself like it was in the Old Testament.

The Controversy of Zion

First published in “A Witness and A Testimony” magazines, 1956
Chapter 1
Chapter 2 – The Controversy in the Realm of Christian Profession

Excerpt from the Work

The Controversy of Zion
by T. Austin-Sparks
Chapter 1

“For it is the day of the Lord’s vengeance, the year of recompense in the controversy of Zion” (Isaiah 34:8).
“For thus saith the Lord unto me, As the lion and the young lion growling over his prey, if a multitude of shepherds be called forth against him, will not be dismayed at their voice, nor abase himself for the noise of them: so will the Lord of hosts come down to fight upon mount Zion, and upon the hill thereof” (Isaiah 31:4, A. R. V.).
“A noise shall come even to the end of the earth for the Lord hath a controversy with the nations; he will enter into judgment with all flesh: as for the wicked, he will give them to the sword, saith the Lord” (Jeremiah 25:31, A. R. V.).
“Why do the nations rage, and the peoples meditate a vain thing? The kings of the earth set themselves, and the rulers take counsel together, against the Lord, and against his anointed, saying, Let us break their bonds asunder, and cast away their cords from us. He that sitteth in the heavens will laugh: the Lord will have them in derision.

Then will he speak unto them in his wrath, and vex them in his sore displeasure: Yet I have set my king upon my holy hill of Zion. I will tell of the decree: The Lord said unto me, Thou art my son; this day have I begotten thee. Ask of me, and I will give thee the nations for thine inheritance, and the uttermost parts of the earth for thy possession. Thou shalt break them with a rod of iron; thou shalt dash them in pieces like a potter’s vessel” (Psalm 2:1-9, A. R. V.).

I want us to consider the meaning of that little phrase “the controversy of Zion”. We know that, in the Word, Zion and Jerusalem are often synonymous terms. If there is a difference, it is that Zion denotes the intrinsic values of all that Jerusalem is supposed to represent and contain. We recognise that difference and must keep it in mind. When we come to Zion, we are coming to the high peak, the ultimate significance of all that Jerusalem stands for.

Jerusalem the Storm Centre of the Nations

Speaking of Jerusalem, we know from history, from the Scripture, that Jerusalem has always been, and still remains, the storm centre of the ages. There is a little phrase in the Old Testament used of Jerusalem that she would be “a cup of reeling unto all peoples” (Zech. 12:2), and behind the phrase is a picture. It really sets forth a threshold, and on that threshold a cup full, and those who come to that threshold and drink of that cup stagger and reel, are thrown into confusion, and Jerusalem is said, in that picturesque way, to be like that to the nations. The nations coming against Jerusalem would find that on the very threshold they met something that threw them into confusion, completely upset all their calculations. She would be to the nations a cup of reeling. To the nations, yes, that is what Jerusalem truly has been and still is. They do not find that they can just play with Jerusalem, do as they like with Jerusalem. They meet something that is more than Jerusalem, something they cannot cope with.