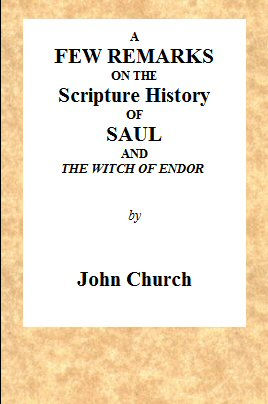 Church Saul Witch of Endor is a single chapter work analyzing Saul´s encounter with the witch, which holds that Samuel appearance was a demon or the devil.

Church Saul Witch of Endor is a single chapter work analyzing Saul´s encounter with the witch, which holds that Samuel appearance was a demon or the devil.

This poor unhappy man was the son of Kish, a Benjamite.  The children of Israel, to be like the nations around them, loudly called out for a King, which God gave in his anger and took away in his wrath.  Samuel was appointed to anoint Saul; he then assembled the Hebrews to receive their new king; the people shouted, and wished him joy.  A spirit of prophecy fell on him at times, which astonished many, but it does not appear to have been in a covenant way, so that no one appears to have reaped any benefit from his talent.  Coming to the kingdom, God furnished him with natural abilities for the government of the people.  Hence it is said, God gave him another heart—not the new heart and the right spirit he has promised his people, but a mind capable of managing the affairs of a kingdom.  Soon after this advancement, Saul distinguished himself in some very great exploits, but fell an awful victim to his pride, which was manifested in his envying David, whose fame began to spread among his people.  Who can stand before envy?  After God had so particularly honoured David, Saul’s sun set at noon day, while light was rising on David, never to go dawn.

The enmity of Saul was great indeed, which set him upon the awful act of murder; this infernal intention p. 12he prosecuted till the last stage of his life, and finding David had taken shelter among the Philistines, he gave over thoughts of getting him destroyed.  About the year of the world three thousand and forty nine, the Philistines invaded his kingdom, and encamped in the very heart of it, perhaps at the very time he was troubling the afflicted David.  Saul now fell into the deepest distress of mind; his measure was now, nearly filled up, and a righteous God was now about to take vengeance on him for his disobedience in the matter of the Amalekites; his horrid cruelty in the murder of the priests and their families; and his enmity to David, of course to David’s God.  Despair seizing his soul and preying on his spirits, he first calls on God, but most probably not in the appointed way; nor did he wait God’s answer, but fled from him in the pride of his heart, and applied to the devil and his daughter, the Witch of Endor, for relief to his mind.  Sad refuge, miserable comforters indeed!  He wanted to see and speak with Samuel the Prophet, whom he had neglected and disobeyed in his life time, and therefore as God was departed from him, nor would answer him, he was determined, in defiance of Jehovah, to seek redress, from the Devil.

The Witch, no doubt, retiring to another apartment than that in which Saul was, used her spells and enchantments, to bring up the pretended Samuel, who first told her who her client was, which made her cry out, Thou art Saul, come to me in disguise.  p. 13After Saul had assured her no harm should come to her, of course she had nothing to fear from man, and no doubt much conversation took place, which is not recorded, between the Witch and Saul.  But he being in haste, asked her what she saw when she had used her spells.  She answered and said, I saw gods ascending out of the earth: the learned say it is not a plural, but ought to be rendered a god—Angels, and Magistrates used to be so called.  This idea of the singular number is supported by the question, What form is he of?  And the Witch said, An old man with a mantle.

She did not say she saw Samuel, nor did the Ghost say it was; and it is queried whether Saul saw the spectre at all; but he bowed himself to the ground; perhaps to hear what the spectre had to say, as their speech was called muttering; or if Saul saw the figure, then the conversation that passed is recorded, at least part of it.  The spectre pretends he was Samuel in a glorified state; and that Saul had disquieted him.  He told him that Saul and his sons should be with him the next day.  He then brought up some of his sins, and charged them home to his conscience, in order to drive him into desperation: this made Saul faint in the house of the Witch, and he could scarcely be prevailed on to take any refreshment.

He then travelled all night to his troops.  When the battle was fought, the Hebrews were routed, but they maintained a running fight till they came to Gilboa, p. 14where the enemy overpowered them; three of Saul’s sons were slain; Saul being pressed by the enemy be begged his Armour-Bearer to run him through with his sword, which he refusing, Saul took his owe sword and fell upon it, and went to his place.  The subject of enquiry is the Circumstance of his application to a Witch to raise up Samuel.  Many have been, and still are of opinion, that it was really Samuel the Prophet, the man of God; the principal reason why even some good men are of this opinion is, simply, on account of the prophecy.  The question with them is, how could Satan foretel what would happen to Saul?  I shall therefore shew the very important reasons why I think the appearance was not the true Samuel.  2ndly, shew the possibility of Satan knowing what would shortly befal Saul.  3rdly, produce the testimony of some of the best writers on this subject.

The whole circumstance we find recorded in the first book of Samuel, 28th chap. which I humbly conceive, if attentively read, and well weighed in the mind, it will appear evident that the spectre which appeared to Saul, could not be the true Samuel.  I state my reason to those friends of mine who are not clear in their judgments on this subject, and request their attention to the following observations:

First, that it is believed that the woman at p. 15Endor was really a Witch; this is not doubted by any; and surely every person who is conversant with their Bible, must remember that Jehovah forbid, on pain of Death, the practice of Witchcraft, Divination, Necromancy, or consulting the dead.  Hence the command, Thou shalt not suffer a Witch to live.  As they rejected the Most High, and sought to devils, the sworn foes of God and his Saints; therefore it is absurd to suppose that God would countenance such a practice in Saul’s case.—Second, It is evident God has absolutely refused to answer Saul, and if he got any answer from the other world at all, God did not send it; then Satan must either send it, or come himself.—Third, It is declared God would not answer him by Prophets; and we all know Samuel was a Prophet; then it could be no true prophet of God.—Fourth,