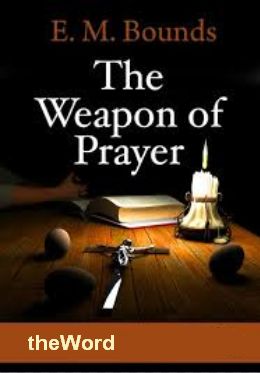 The Weapon of Prayer is how prayer is used in spiritual battle against Satan and his armies by the child of God warring for the things of God.

Weapon of Prayer
by E.M. Bounds

The Weapon of Prayer is how prayer is used in spiritual battle against Satan and his armies by the child of God warring for the things of God.

Prayer Essential to God – Putting God to Work – The Necessity for Praying Men – God’s Need of Men Who Pray – Prayerless Christians – Praying Men at a Premium – The Ministry and Prayer – Prayerlessness in the Pulpit – Prayer-Equipment for Preachers – The Preacher’s Cry-Pray For Us! – Modern Examples of Prayer – Modern Examples of Prayer (Continued) Amazon.com

Table of Contents Weapon of Prayer

“GOD’S great plan for the redemption of mankind is as much bound up to prayer for its prosperity and success as when the decree creating the movement was issued from the Father, bearing on its frontage the imperative, universal and eternal condition, “Ask of me, and I will give thee the heathen for thy inheritance and the uttermost part of the earth for thy possession.” In many places an alarming state of things has come to pass, in that the many who are enrolled in our churches are not praying men and women. Many of those occupying prominent positions in church life are not praying men. It is greatly to feared that much of the work of the Church is being done by those who are perfect strangers to the closet. Small wonder that the work does not succeed. While it may be true that many in the Church say prayers, it is equally true that their praying is of the stereotyped order. Their prayers may be charged with sentiment, but they are tame, timid, and without fire or force. Even this sort of praying is done by a few straggling men to be found at prayer-meetings. Those whose names are to be found bulking large in our great Church assemblies are not men noted for their praying habits. Yet the entire fabric of the work in which they are engaged has, perforce, to depend on the adequacy of prayer. This fact is similar to the crisis which would be created were a country to have to admit in the face of an invading foe that it cannot fight and have no knowledge of the weapons whereby war is to be waged. In all God’s plans for human redemption, He proposes that men pray. The men are to pray in every place, in the church, in the closet, in the home, on sacred days and on secular days. All things and everything are dependent on the measure of men’s praying. Prayer is the genius and mainspring of life. We pray as we live; we live as we pray. Life will never be finer than the quality of the closet. The mercury of life will rise only by the warmth of the closet. Persistent non-praying eventually will depress life below zero.” –E. M. Bounds

More Works on these tags

Table of Contents Weapon of Prayer
1. Prayer Essential to God
2. Putting God to Work
3. The Necessity for Praying Men
4. God
5. Prayerless Christians
6. Praying Men at a Premium
7. The Ministry and Prayer
8. Prayerlessness in the Pulpit
9. Prayer Equipment for Preachers
10. The Preacher
11. Modern Examples of Prayer
12. Modern Examples of Prayer (Continued)