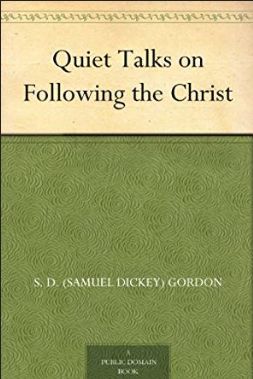 Contents of Quiet Talks on Following the Christ

Introduction
A. Following the Christ
1. The Lone Man Who Went Before
2. The Long, Rough Road He Trod
3. The Pleading Call To Follow
B. What Following Means
4. A Look Ahead
5. The Main Road
6. The Valleys
7. The Hilltops
8. Shall We Go?
9. Finger-Posts
10. Fellow-Followers
11. The Glory of the Goal,–Face To Face
12. Footnotes

was a prolific author and evangelical lay minister active in the latter part of the 19th and early 20th centuries.

Born in Philadelphia, he served as assistant secretary of the Philadelphia Young Men's Christian Association (YMCA) in 1884-86 and then became state secretary for the YMCA in Ohio, serving from 1886 to 1895.

He is perhaps best known for his series of books "Quiet Talks on ...", which have their own unique style very much different to that of other writers of the day.

These talks have been given, in substance, at various gatherings in Great Britain, Continental Europe, and parts of the Far East, during the past four years. The simple directness of the spoken word has been allowed to stand. Portions of chapters three, four, six, and eight have appeared at various times in “The Sunday School Times.”
If any who read may find some practical help through the Master’s gracious touch upon these simple words, they are earnestly asked to add their prayers that that same gracious touch may be felt by others wherever these talks may go.