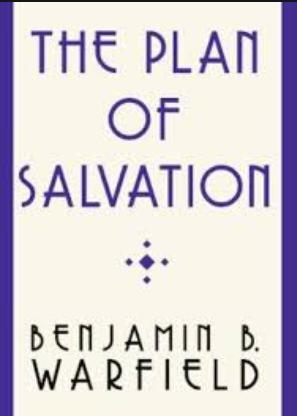 Plan of Salvation is a 5 chapter work which examines different religious groups view of the plan of Salvation; Differing concepts, autosoterism, sacerdotalism, universalism, and Calvinism. Warfield is Calivinst.

Plan of Salvation is a 5 chapter work which examines different religious groups view of the plan of Salvation; Differing concepts, autosoterism, sacerdotalism, universalism, and Calvinism. Warfield is Calivinst.

Contents of Warfield Plan of Salvation

This module created by wlue777

This code below takes a while to load

security-of-the-saints eternal-security | A Question that should startle every man who is not a Christian | A solemn question for those who are rejecting Christ | Able to Save | Active and Passive Obedience of Christ | Administration of Redemption | Adoption | Almost Christian | Another Gospel | Assurance | Atonement | Atonement in its Results | Atonement of Christ | Attraction of the Cross | Backsliders | Blood | Blood Cleanses | Born again | Born of God | Call | Call of God | Calvary | Christ as our Ransomer | Christ's knowledge spiritual not academic | christian | Christian Righteousness | Christian Sanctification | Christian Sonship | Christian Titles | Circumcision of the Heart | Complete in Christ | Consequences of Spiritual Baptism | Conversion | Cross Bearing | Cross Rejected | Dead man quickened | Disciple | Divine Purpose of Redemption | Divine Rule of Faith | Do you believe? | Doctrine of Election | Effects of the Gospel | Effectual Calling | Elect in Bondage | Election | Entail of the Covenant | Eternal Hope | Eternal Life | Eternal Security | Evangelism | Except ye repent | Exclusion of Non-Election | Faith | Faith and Assurance | Faith or Believe | Faith under Fire | Faith versus Works | Falling from Grace | Few are Saved | From Infidelity to Faith | Full Assurance | Full Provision | Glorification | God is for Us | God's Call | Good works | Gospel | Gospel no Failure | Gospel of Christ | Gospel of God | Gospel of His Son | Gospel of the Glory of God | Gospel of the Kingdom | Gospel Vocation | Grace | Grow in Grace | He giveth life | hearing ear and seeing eye | Historical Manifestation of the Redeemer | Holiness of the Blood | How Are Persons Made Believers? | Importance of Salvation | Impotence of the Law | Inquiring Sinner directed to the Cross | Jesus is the Only Way to Salvation | Jesus is the Proper Object of Faith | Jesus' Purpose in Dying | justification | Justification by Faith | Justification is by Grace alone | Life of the Elect | Lord our Righteousness | Love of God to Man | Man's Chief End | Meaning of the Blood | Means of Grace | Mediatorial Ministry | Men Must Do Something to Be Saved. | More Excellent Way | mortification | most important question that any man ever asked or answered | Names of the Redeemer | Nature and Means of Growth in Grace | Nature of Salvation | Necessity of Regeneration | New Birth | New Converts | New Testament Example of Conversion | No Condemnation in Christ Jesus | Not ashamed of the Gospel | Nothing but the Blood | Obedience to Christ gives Assurance | Old Old Story | Our Righteousness | Outward and Effectual Calling | Penitent Thief | Perseverance | Persevere in Faith | Perverting the Gospel | Predestination | Predestination and the Foreknowledge of God | Principle of Calvary | Protection | Provision | Punishment After Death of Those Who Die in Their Sins | Ransom Election | Reality of the faith | Rebirth | Reconciliation | Redemption | Regeneration | Renewed Mind | Repentance | Repentenance | Representative Principle of Atonement | Rescue | Saints | Salvation | Salvation by Grace | Salvation of All Men | Salvation of children | Salvation through the Blood | Satisfaction View of the Atonement | Saving Faith | Security of the Saints | Security-Perseverance | Serve the Lord | Significance of Christ's Death | Simplicity of the Gospel of Christ | Sin and Redemption | Soteriology | Soul-Winning | Spirit of Adoption | State of Salvation | Tenure of Covenant Blessings | The Course to Pursue to Be Infallibly Safe | the Intermediate and the Eternal | The Only Way | The Way | Transfigured Lives | True Discipleship | True Repentance | Under the Blood | Unlimited Atonement | Way of Salvation made as Plain as Day | We cannot escape the Blood | Wells of Salvation | What Grace Teaches | What it costs not to be a Christian | What Must Men Believe to Be Saved? | Where will you spend eternity | Who is a Christian | Whosoever will | Working out our own Salvation | Workman that needeth not to be ashamed

Plan of Salvation is a 5 chapter work which examines different religious groups view of the plan of Salvation; Differing concepts, autosoterism, sacerdotalism, universalism, and Calvinism. Warfield is Calivinst. This module has been updated on April 9, 2019.