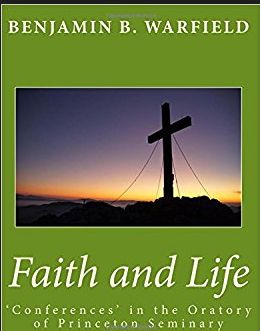 B. B. Warfield kept up the Princeton tradition of Sunday afternoon classes with the students of the Seminary in which, in his own words, ‘the deepest currents of the Christian faith and life were explored’. This book contains some of the memorable addresses he gave on those occasions.

There was a time when Princeton Seminary was the center of biblical Presbyterian training (of the highest caliber) in the U.S.. Such notable professors as Archibald Alexander, Samuel Miller, and Charles Hodge would have addresses for students on Sunday afternoons. B. B. Warfield, the lion of Princeton, continued this practice. These 41 chapters come from some of these addresses to Warfield’s students.

The contents of this book is tremendous and highly recommended. Monergism Book

Table of Contents of Faith and Life

from our Library at twmodules.com

security-of-the-saints eternal-security | A Question that should startle every man who is not a Christian | A solemn question for those who are rejecting Christ | Able to Save | Active and Passive Obedience of Christ | Administration of Redemption | Adoption | Almost Christian | Another Gospel | Assurance | Atonement | Atonement in its Results | Atonement of Christ | Attraction of the Cross | Backsliders | Blood | Blood Cleanses | Born again | Born of God | Call | Call of God | Calvary | Christ as our Ransomer | Christ's knowledge spiritual not academic | christian | Christian Righteousness | Christian Sanctification | Christian Sonship | Christian Titles | Circumcision of the Heart | Complete in Christ | Consequences of Spiritual Baptism | Conversion | Cross Bearing | Cross Rejected | Dead man quickened | Disciple | Divine Purpose of Redemption | Divine Rule of Faith | Do you believe? | Doctrine of Election | Effects of the Gospel | Effectual Calling | Elect in Bondage | Election | Entail of the Covenant | Eternal Hope | Eternal Life | Eternal Security | Evangelism | Except ye repent | Exclusion of Non-Election | Faith | Faith and Assurance | Faith or Believe | Faith under Fire | Faith versus Works | Falling from Grace | Few are Saved | From Infidelity to Faith | Full Assurance | Full Provision | Glorification | God is for Us | God's Call | Good works | Gospel | Gospel no Failure | Gospel of Christ | Gospel of God | Gospel of His Son | Gospel of the Glory of God | Gospel of the Kingdom | Gospel Vocation | Grace | Grow in Grace | He giveth life | hearing ear and seeing eye | Historical Manifestation of the Redeemer | Holiness of the Blood | How Are Persons Made Believers? | Importance of Salvation | Impotence of the Law | Inquiring Sinner directed to the Cross | Jesus is the Only Way to Salvation | Jesus is the Proper Object of Faith | Jesus' Purpose in Dying | justification | Justification by Faith | Justification is by Grace alone | Life of the Elect | Lord our Righteousness | Love of God to Man | Man's Chief End | Meaning of the Blood | Means of Grace | Mediatorial Ministry | Men Must Do Something to Be Saved. | More Excellent Way | mortification | most important question that any man ever asked or answered | Names of the Redeemer | Nature and Means of Growth in Grace | Nature of Salvation | Necessity of Regeneration | New Birth | New Converts | New Testament Example of Conversion | No Condemnation in Christ Jesus | Not ashamed of the Gospel | Nothing but the Blood | Obedience to Christ gives Assurance | Old Old Story | Our Righteousness | Outward and Effectual Calling | Penitent Thief | Perseverance | Persevere in Faith | Perverting the Gospel | Predestination | Predestination and the Foreknowledge of God | Principle of Calvary | Protection | Provision | Punishment After Death of Those Who Die in Their Sins | Ransom Election | Reality of the faith | Rebirth | Reconciliation | Redemption | Regeneration | Renewed Mind | Repentance | Repentenance | Representative Principle of Atonement | Rescue | Saints | Salvation | Salvation by Grace | Salvation of All Men | Salvation of children | Salvation through the Blood | Satisfaction View of the Atonement | Saving Faith | Security of the Saints | Security-Perseverance | Serve the Lord | Significance of Christ's Death | Simplicity of the Gospel of Christ | Sin and Redemption | Soteriology | Soul-Winning | Spirit of Adoption | State of Salvation | Tenure of Covenant Blessings | The Course to Pursue to Be Infallibly Safe | the Intermediate and the Eternal | The Only Way | The Way | Transfigured Lives | True Discipleship | True Repentance | Under the Blood | Unlimited Atonement | Way of Salvation made as Plain as Day | We cannot escape the Blood | Wells of Salvation | What Grace Teaches | What it costs not to be a Christian | What Must Men Believe to Be Saved? | Where will you spend eternity | Who is a Christian | Whosoever will | Working out our own Salvation | Workman that needeth not to be ashamed

Faith and Life is a set of 41 sermons by B.B: Warfield on our Christian faith and our Christian life. These sermons reflect his beliefs and experience.