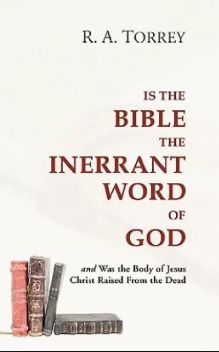 In R.A. Torrey’s Is the Bible the Inerrant Word of God, Torrey deals with several issues. First of all, he identifies those who believe in inerrancy and those who don’t. Secondly he deals with difficulties in the Bible. Then he turns his attention to the death and resurrection of Jesus.

Is the Bible the Inerrant Word of God?
and Was the Body of Jesus Raised from the Dead?

Is the Bible the Inerrant Word of God?

By  R. A. TORREY
DEAN, BIBLE INSTITUTE, LOS ANGELES
Author of “The Importance and Value of Proper Bible Study,”
“The Real Christ,” “What the Bible Teaches,” “How to Work for Christ,” etc.
NEW YORK
GEORGE H. DORAN COMPANY Copyright, 1922

In R.A. Torrey’s Is the Bible the Inerrant Word of God, Torrey deals with several issues. First of all, he identifies those who believe in inerrancy and those who don’t. Secondly, he deals with difficulties in the Bible. Then he turns his attention to the death and resurrection of Jesus.

Table of Contents of Is the Bible the Inerrant Word of God?

1. Who Says, “The Bible is the Inerrant Word of God?”
2. Who Says, “The Bible is Not the Inerrant Word of God?”
3. Difficulties in the Bible: General Statements About Them
4. Difficulties in the Bible: What Shall We Do With Them?
5. What to Do With the Bible
6. Be Not Deceived: God Is Not Mocked
7. Is It Absolutely Certain That the Body of Jesus That Was Nailed to the Cross, That Really Died, and That Was Laid in Joseph’s Tomb, Was Raised from the Dead?
8. What One Gains by Believing in the Christ Who Rose from the Dead

Reuben Archer Torrey (28 January 1856 – 26 October 1928) was an American evangelist, pastor, educator, and writer. He graduated from Yale University in 1875 and Yale Divinity School in 1878. Following graduation, Torrey became  Congregational minister in Garrettsville, Ohio, in 1878. After further studies in theology at Leipzig University and Erlangen University in 1882–1883, Torrey joined Dwight L. Moody in his evangelistic work in Chicago in 1889, and became superintendent of the Bible Institute of the Chicago Evangelization Society (now Moody Bible Institute).

Five years later, he became pastor of the Chicago Avenue Church (now the Moody Church) in 1894.  In 1902–1903, he preached in nearly every part of the English-speaking world and with song leader Charles McCallon Alexander conducted revival services in Great Britain from 1903 to 1905. During this period, he also visited China, Japan, Australia, and India. Torrey conducted a similar campaign in American and Canadian cities in 1906–1907. Throughout these campaigns, Torrey used a meeting style that he borrowed from Moody's campaigns of the 1870s. In 1907, he accepted an honorary doctorate from Wheaton College.Read more

How to Bring Men to Christ, (1893)
Baptism with the Holy Spirit, (1895)
How to Study the Bible with Greatest Profit, (1896)
How to Obtain Fullness of Power in Christian Life and Service (1897)
How to Pray,
What the Bible Teaches, (1898)
Divine Origin of the Bible,  (1899)
How to Promote and Conduct a Successful Revival, (1901)
How to Work for Christ, (1901)
Revival Addresses, (1903)
Talks to Men About the Bible and the Christ of the Bible, (1904)
The Bible and Its Christ: Being Noonday Talks with Business Men on Faith and Unbelief (1906)
Difficulties in the Bible, (1907)
Studies in the Life and Teachings of our Lord, (1909)
The Higher Criticism and the New Theology (1911)
The Fundamentals: a Testimony to the Truth Editor, (four volumes) ISBN 0-8010-8809-7
The Person and Work of the Holy Spirit
The Baptism with the Holy Spirit
The Holy Spirit: Who He Is and What He Does and How to Know Him in All the Fulness of His Gracious and Glorious Ministry
The Importance and Value of Proper Bible Study
Why God Used D. L. Moody, (1923) (modern reprint by CrossReach Publications, 2016)
The Voice of God in the Present Hour (1917)
Is the Bible the Inerrant Word of God?: And was the Body of Jesus Raised from the Dead? (1922)
The Power of Prayer and the Prayer of Power, (1924)
The Bible, the Peerless Book: Gods Own Book and Gods Only Book (1925)
How to Succeed in the Christian Life,
The Gospel for Today
Real Salvation and Whole-Hearted Service
The Fundamental Doctrines of the Christian Faith,
Torrey's Topical Textbook
Treasury of Scripture Knowledge
Anecdotes and Illustrations
The Deity of Jesus Christ (posts/available on 7/6/2020)
Short article: Keep Praying Until God Answers When He Seems Not to Hear, Trust Him Still (included in Cox Articles on soulwinning)
By R. A. Torrey (1856–1928)
more on wikipedia.org

Very good work on the Inerrant Word of God