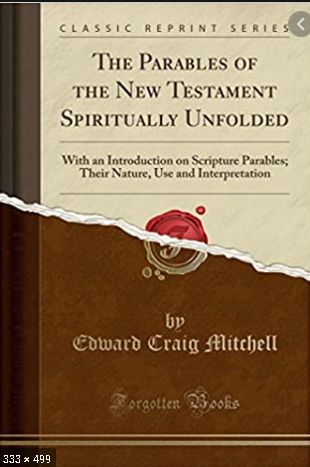 Mitchell thoroughly expounds each of the parabolic stories of the Old Testament, where he seeks spiritual truths hidden in some of the oldest stories of the Bible.

Mitchell Parables of the OT Spiritually Unfolded thoroughly expounds each of the parabolic stories of the Old Testament, where he seeks spiritual truths hidden in some of the oldest stories of the Bible.

Although nearly 450 pages (and 1+ megabytes of text uncompressed), the book is cleanly divided, almost like a modern book. Mitchell identifies, analyzes and interprets 48 Old Testament parables.

Edward Craig Mitchell
Mitchell was an archaeologist and the first minister at the Saint Paul Society of the New Jerusalem Church, now known as the Virginia Street Swedenborgian Church.

Contents of Mitchell Parables of the OT Spiritually Unfolded

Judges
—–The Trees Choosing A King.
—–Samson’s Riddle.
2 Samuel
—–Nathan’s Parable Of The Ewe—Lamb.
—–The Revengers Of Blood.
1 Kings
—–The Escaped Prisoner.
2 Kings
—–The Ambitious Thistle.
Isaiah
—–The Wasted Vineyard.
Jeremiah
—–The Almond Rod And The Seething Pot.
—–The Marred Girdle.
—–The Potter’s Vessel Marred.
—–The Potter’s Vessel Broken.
—–The Two Baskets Of Figs.
—–Jeremiah’s Bonds And Yokes.
—–Jeremiah Hiding The Stones In The Mortar.
Mitchell Parables of the OT Spiritually Unfolded
Ezekiel
—–The Infolding Fire, The Living Creatures, And Their Wheels, Etc.
—–Ezekiel Eating The Roll Of A Book.
—–Symbolic Prophecy Of The Siege Of Jerusalem.
—–Ezekiel Cutting Off His Hair, Etc.
—–Ezekiel’s Vision Of Jerusalem’s Idolatry.
—–Ezekiel’s Vision Of Slaughter In Jerusalem
—–Ezekiel Removing His Goods.
—–Ezekiel Eating Bread With Quaking, And Drinking Water With Trembling.
—–The False Prophetesses.
—–The Vine Of Jerusalem
—–The Eagles And The Vine.
—–Eating Sour Grapes, Etc.
—–The Lioness And Her Whelps.
—–Israel’s Mother As A Vine.
—–Jerusalem, As A Boiling Fleshpot
—–The Assyrian A Cedar In Lebanon.
—–The Evil Shepherds.
—–Ezekiel’s Prophetic Vision Of The Dry Bones Revived.
—–The Two Sticks Joined.
—–Invitation To The Great Sacrifice.
—–The Waters Flowing From The Lord’s House.
Mitchell Parables of the OT Spiritually Unfolded
Daniel
—–Nebuchadnezzar’s Dream Of The Great Image.
—–Nebuchadnezzar’s Dream Of The Great Tree.
—–The Feast, And The Hand—Writing On The Wall.
—–Daniel’s Vision Of The Four Beasts, Etc.
—–The Vision Of The Ram And The He—Goat.
Zechariah
—–The Man Among The Myrtle Trees, And The Horses.
—–The Four Horns And The Four Carpenters.
—–The Man With A Measuring—Line, Etc.
—–Joshua, The High Priest, Etc.
—–The Golden Candlestick And The Olive—Trees.
—–The Flying Roll.
—–The Women And The Ephah.
—–The Four Chariots And Their Horses.
Mitchell Parables of the OT Spiritually Unfolded

Swedenborgianism is a religion based on the beliefs of and influenced by the writings of scientist and Swedish Lutheran theologian Emanuel Swedenborg (1688–1772). According to Swedenborg, he received a new revelation from Christ in visions he experienced over a period of at least twenty-five years. He predicted in his writings that God would replace the traditional Christian Church, establishing a New Church that would worship Jesus Christ as God. According to New Church doctrine, each person must cooperate in repentance, reformation, and regeneration.

The movement was founded on the belief that God explained the spiritual meaning of the Bible to Swedenborg to reveal the truth of the Second Coming of Jesus Christ. Swedenborg cited divine revelation for his writings,[2] and his followers believe that he witnessed the Last Judgment in the spiritual world with the inauguration of the New Church.

The church is seen by its members as what Jesus is establishing with those who believe that he is the one God of heaven and Earth, with obedience to Jesus's commandments being necessary for salvation. It is thought that any Christian holding these beliefs is part of the New Church. New Church organizations acknowledge what they believe to be the universal nature of Jesus's church: all who do good in accordance with the truth of their religion will be accepted by Jesus into heaven (since God is goodness itself), and doing good joins one with God. Adherents believe that New Church doctrine is derived from the Bible and provides enlightenment of the truth; this leads to diminished doubt, a recognition of personal faults, and a more focused, happier life.

The Doctrines of Swedenborgianism

The Doctrine of the Lord - They believe that God had to come into the world to save man. They interpret this as God coming to remove hell from man. Hell being a sin, and removing it is through doing good, since good is God, and doing good unites us with God. They believe God is a Trinity like the man is body, soul, and spirit. Before creation, the Trinity didn't exist, therefore. They deny that the Bible teaches a three-person trinity, and they believe there is only one person in the Trinity, Jesus. They believe the Trinity from eternity past (because they believe in a Trinity when God split into three, spirit, body and soul in the creation of the man-God Jesus) is illogical.

The Doctrine of Salvation - The sum of faith is that he who lives well and believes is saved. Faith is not mere belief. Faith without charity is not faith, and charity without faith is not charity; faith and charity are intertwined. So the 10 Commandments are the sum of these good works.

The Bible concerns God and his kingdom. The New Church has three pillars: God's divinity, the holiness of the Bible, and a life of good works. The Bible is divinely inspired; according to adherents, its spiritual sense has been revealed in the New Church through symbolic correspondence. Its literal meaning, similar to a parable, hides the inner, spiritual sense: "The truths of the sense of the letter of the Word are in part not naked truths, but are appearances of truth, and like similitudes and comparisons are taken from such things as are in nature; and thus are such as have been accommodated and adapted to the capacity of the simple and also of children."

The Bible cannot be properly understood without doctrine, and church doctrine should be confirmed with it. Doctrine can only be known by those who are enlightened by God, and those who are not can fall into heresy. The Bible contains divine truth; according to New Church adherents, a person joins God and his angels when reading it.

See Wikipedia.org for more on their doctrines.

Mitchell (Swedenborgianism) thoroughly expounds each of the parabolic stories of the Old Testament, where he seeks spiritual truths hidden in some of the oldest stories of the Bible.