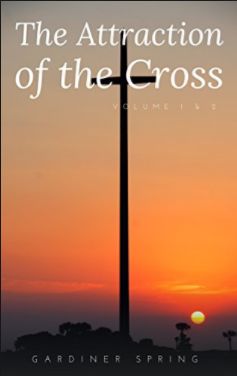 This 23 chapter work, Attraction of the Cross, looks at various aspects of the Cross of Jesus Christ.

The Attraction of the Cross

The Attraction of the Cross
By Gardiner Spring

This 23 chapter work looks at various aspects of the Cross of Jesus Christ.

Gardiner Spring was among the front rank of American preachers. His father, Samuel Spring, was a notable Congregational minister who had served as a chaplain to the troops during the War of American Independence, and from 1777 to 1819 was minister at Newburyport, Massachusetts. Gardiner Springwas born in … (from Banner of Truth above)

Contents of Attraction of the Cross

More works on the Cross