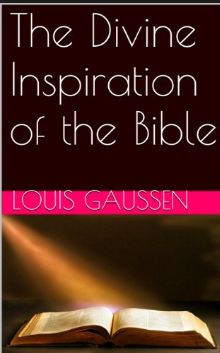 This work by Louis Gaussen, The Divine Inspiration of the Bible, is translated from German (I think, but from another language). One of the key concepts he treats is the concept of theopneustia, which is the Greek adjective, “God-Breathed” or inspired. He looks at different aspects of the Bible’s inspiration.

This work by Louis Gaussen, The Divine Inspiration of the Bible, is translated from German (I think, but from another language). One of the key concepts he treats is the concept of theopneustia, which is the Greek adjective, “God-Breathed” or inspired. He looks at different aspects of the Bible’s inspiration.

The Divine Inspiration of the Bible

The Divine Inspiration of the Bible
By Louis Gaussen

Table of Contents of Divine Inspiration of the Bible

1. Definition of Theopneustia
2. Scriptural Proof of the Divine Inspiration
3. Brief Didactic Abstract of the Doctrine of Divine Inspiration
4. Examination of objections
5. Inspiration of Evasions
6. On Sacred Criticism, in relations, it bears to Divine inspiration
7. Conclusion
8. Analysis
9. Footnotes

Every Christian should be vitally concerned with the verbal or plenary inspiration of the Bible. On this issue, the truthfulness of Christianity stands or falls. If the Bible, for example, is not totally inspired, the Christian must elevate himself to the position of a judge to determine which parts are and which parts are not inspired. After he has made that human judgment, he must humble himself to the status of a believer, thus relegating his trust to his own wisdom. His faith, as a result, rests in himself rather than in God.

So argues L. Gaussen in Divine Inspiration of the Bible, originally entitled Theopneustia: The Plenary Inspiration of the Holy Scriptures. First published in French and later translated into English in 1841, this classic work was written to answer the unbelieving rationalists who sought in the 17th and 18th Centuries to reduce the Bible in the minds of men to human production. Gaussen’s objective was “to set forth, establish, and defend the Christian doctrine of Divine Inspiration.” That doctrine, to him, is that the Bible is fully inspired. He, therefore, wrote, “to establish by the word of God that the Scripture is from God, that the Scripture is throughout from God, and that the Scripture throughout is entirely from God.”

Gaussen lived in Geneva, Switzerland at the beginning of the 19th Century when the influence of German and French rationalism began to effect the National Church of Switzerland. Along with Robert Haldane, Merle D’Aubigne, and others, Gaussen led the opposition to this infidelity. They fought it with such uncompromising conviction that the Evangelical Dissenting Church had to be established to receive all who were dissatisfied with the National Church. They also started a school of theology in which Gaussen served as “Professor of Systematic Theology.” Theopneustia, an outgrowth of his opposition to rationalism and of his work as a professor, became the classic answer to objections to verbal inspiration.

The professor’s approach to the subject is twofold. The first part of the book is positive. He begins with a clear and minute definition of the Bible doctrine of verbal inspiration and then follows with a careful and detailed analysis of scriptures that demonstrate the truth of his definition. The remainder of the work, constituting more than half of the book, is negative and contains a forthright consideration of the objections which rationalists offer.

Gaussen’s book is not an antique, of value only for display in a museum of ancient history. The objections he answers are essentially the same ones still bandied about by today’s rationalistic counterparts, the modernists. Gaussen deals, for example, with the variations in the Gospel accounts, devoting special attention to the reports of the resurrection. He also considers alleged historical and scientific inaccuracies, supposed loss of inspiration through manuscript variations and translations and proposed contradictions. Readers who have been favorably impressed with the incomparable value of Warfield’s The Inspiration and Authority of the Bible and have returned again and again to reread it will be similary affected by Gaussen’s Theopneustia.

Serious Bible students live at an extremely opportune time when so many of the classic works are being formatted for e-Sword. Students of Scripture will want Gaussen’s work in their e-Sword library and will likely refer to it often as they face objections to the verbal inspiration of the Bible.