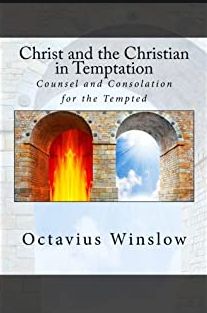 Christ and the Christian in Temptation

“For we do not have a high priest who is unable to sympathize with our weaknesses, but we have one who has been tempted in every way, just as we are–yet was without sin.” Heb 4:15

“Tis one thing to be tempted,
Another thing to fall.”–Shakespeare.

CONTENTS of Winslow Christ and the Christian in Temptation

The design of the present volume is not to examine the various hypotheses advanced as to the mode by which the Son of God was assailed by Satan in the wilderness. Accepting, as the author unhesitatingly does, the received and orthodox opinion that the Temptation, as narrated by the Evangelist, is not allegorical, but what it professes to be, a veritable fact,-the representation, not of a mythical, but of an actual transaction,-he finds no difficulty in presenting it in a point of light which he does not remember to have seen hitherto attempted, viz., the identity, in all its essential features, of Christ’s temptation and those of the Christian.
Acceding-as we are bound-to the inspired declaration that our Lord was “tempted in all points like as we are,” it follows that there must exist a corresponding coincidence in the collision of Christ with Satan, and the spiritual conflict in which every good man is engaged of the same nature and with the same foe. We do not, therefore regard a single attack of Christ by the Devil as not having its counterpart, in some degree, with the experience of every Christian. Nor can we imagine a fact more instructive and consolatory to those who, from the same source and with the same weapons, “are in heaviness through manifold temptations,” than the assurance of the personal and perfect oneness of the tempted Head of the Church-as its great sympathetic nerve-with the tempted members of His Body.
The author devoutly trusts that the study of this entwined interest of Christ and His people-however imperfectly presented-may, with the blessing of the Holy Spirit, prove as soothing and sanctifying to the mind of the reader, as its discussion in these pages has been to his own. To the Divine benediction of the Triune God, and to the gracious acceptance of the one tempted Church of Christ, he prayerfully and affectionately commends the volume.

More Works on Satan as Tempter

In this 8 chapter theWord module on Temptation, Winslow examines how Satan tricks the Christian into falling into sinful conduct. These elements are the keys by which Satan tricks us.