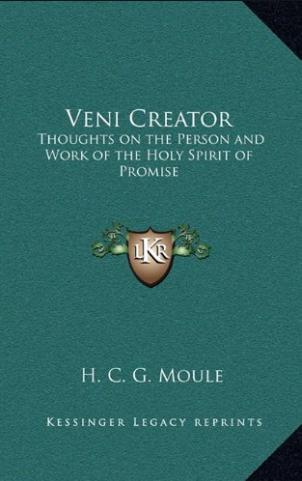 THE Greek represented by this clause of the English Version may be somewhat more literally rendered, “But be ye filled in the Spirit,” or, perhaps, “But be ye full in the Spirit.”1 The importance of this literalism will appear in the course of our study of this word of God; at present I do but note it, and pass on.

Moule was schooled at home before entering Trinity College, Cambridge in 1860, where he graduated BA in 1864.[1] He was elected a Fellow of Trinity in 1865, and became an assistant master at Marlborough College before he was ordained deacon in 1867 and priest in 1868. From 1867 he was his father's curate at Fordington, Dorset, with a stint of five years as Dean of Trinity College chapel, 1873–1877.[2] In 1880 he became the first principal of Ridley Hall, Cambridge, and then in 1899 became Norrisian Professor of Divinity at the University of Cambridge, until his appointment as Bishop of Durham in September 1901. He was consecrated as a bishop in York Minster on 18 October 1901.[3]

Moule was active in the Higher Life movement and was one of the speakers at the inaugural Keswick Convention. He is buried in St Cuthbert's Cemetery, Durham.

Moule was an Honorary Chaplain to Queen Victoria from December 1898[4] until her death in January 1901, then an Honorary Chaplain to Edward VII for a couple of months until he was appointed bishop. In November 1901 he was elected an Honorary Fellow of St Catherine's College, Oxford, where he had been a Professorial Fellow previously,[5] and in December 1901 he received the degree Doctor of Divinity (DD) by diploma from the University of Durham.[6]

Moule was a New Testament scholar who wrote over 60 books and pamphlets. He contributed the chapters on Paul's letters to the Romans, Ephesians, Philippians, Colossians and Philemon in the Cambridge Bible for Schools and Colleges (1891-98) [9] and also wrote poems on religious subjects; he won the Seatonian Prize at Cambridge for sacred poetry 1869–1873 and again in 1876. He published at least two volumes of poetry in his lifetime, in addition to the prizewinning pieces.[10] He wrote a number of hymns, of which "Lord and Savior, True and Kind" is probably the best known.[11][12]

This is an incomplete list of Handley Moule's published works:

Some of these have been reprinted in recent years; some are available as e-books for the Kindle and other readers.

Taken from Wikipedia.org, article on Moule, all links above go to the Wikipedia article.

theWord modules of works by Moule

One other verbal detail let us not pass by—the “but” which links the clause with the words before it. You see what they are: “Be not drunk with wine, wherein is excess; but be ye filled in the Spirit.” What is the significance of that link? It is, that it places in co-ordination the two precepts of this one verse, the negative and the positive. It assures us that the one is as extensive in its reference and purpose as the other. For every member of the Christian community of Ephesus, beyond a question, it was a primary and impartial moral

1 The parish pulpit is not the place for the discussion of difficult grammatical questions. I therefore did not, in this Sermon, remark on the absence of the definite article before Πνεύµατι, so that the barely literal version is “in Spirit.” But I did not think this material to the main purport of the text. The reference of the word Πνεύµα is in any case to the Holy Spirit, not to the human spirit, whether it is a reference to His Person or to His “influence.”

More Works on the Filling of the Holy Spirit